To bomb or not to bomb? 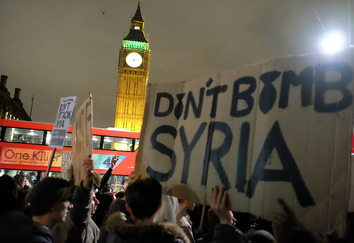 That is the question on all our minds. As amusing as the ‘I will destroy ISIS’ memes on Facebook are, we are not politicians or four star generals, we can't really give a valid opinion on whether or not to stage military intervention in Syria. There are copious arguments both for and against bombing ISIS, but ultimately, our government’s aim is to protect our nation, to protect us.

​Fundamental arguments for military invention in Syria stem from Chapter 7 of the UN Charter, which allows the Security Council to vote on a proportional response to “threats to peace”. For the situation in Syria, this was UN Resolution 2249. The UN described themselves as “determined to combat by any means this unprecedented threat to international peace and security.” The addition of “by any means” may be of paramount importance. The UN have declared military invention to be legal, leaving it to the individual governments to devise the response of their nations. The UK government have voted in favour of military intervention in Syria, therefore there is no legal argument against bombing ISIS.

But is military intervention in Syria justifiable? It is often argued that dropping the atom bomb on Hiroshima saved more lives by ending the Second World War. In our idealistic, modern, civilised societies, the thought of killing to save lives seems to be a folly. But perhaps there is some sense to it. Perhaps the only way to overcome the threat posed by ISIS is to eradicate them completely. Unfortunately, this may involve the killing of innocent people, as at Hiroshima, but have we reached the point of no return? Has it become the survival of the fittest? Kill or be killed. No one can deny that it is time for intervention: the pain, chaos and strife must end. Must we be ruthlessly pragmatic to prevent the outbreak of another world war?

Perhaps the most profound argument against military intervention in Syria is the risk of collateral damage. It is likely that more innocent civilians will die, compared to the number of terrorists killed in the bombings. These innocent people have no control over their fate, and suddenly they have lost their human rights too. Bombing Syria breaches Article 2 of the European Convention on Human Rights: the right to life. Undeniably devastating, but necessary nonetheless? ISIS are not complete idiots, building bases next to schools is a smart tactical move. However unthinkable as it may seem, perhaps the life of one child to save thousands is worth it. Can your conscience handle one child? How about ten? One hundred? Despite the evil that exists in the world, it is human nature to be compassionate, we cannot comprehend the killing of an innocent child, no matter the cause.

Time and time again, we return to the question: is military intervention in Syria just? Perhaps we should look to the seven steps of the Just War Theory.
Is it a last resort? Considering that diplomatic relations appear impossible, the answer may be yes.
Is there a legitimate authority? Yes, UN resolution 2249.
Is it a just cause? Fighting for world peace is undeniably a just cause.
Is there a probability of success? Arguably ISIS strongholds could be destroyed by the combined military prowess of the rest of the world. Is it under the right intentions? We are not bombing ISIS to play ‘My dad is bigger than your dad’ with the rest of the world, we are doing it to eradicate the threat to world peace. Is the response proportional? UN Resolution 2249 stated that the threat should be fought, “by any means”, and as such bombing has been deemed necessary by our government.
And finally, are civilian casualties limited? The answer is no. Civilian casualties are at the heart of this world conflict.

​Military intervention in Syria falls at the final hurdle when comparing it to the Just War Theory, but is 6/7 enough to still your conscience? Or will those innocent children about to die in Syria play on your mind?
​
Emma Baker, Year 13

Create your own unique website with customizable templates.
Photo used under Creative Commons from alisdare1
UA-121891675-1