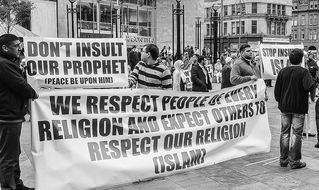 Hate crimes against Muslims in the UK have more than doubled in the past year. This fact represents one of the biggest and most pressing problems within UK society. With recent terror attacks from the so-called Islamic State shaking the public, and being displayed all over the media, public opinion appears to focus its anger on one group of people: Muslims. Imagine how this must feel if you are an ordinary, peace-loving Muslim. Every time a terror attack, such as the May Manchester Bombing and June London Bridge attack, takes place, they are frantically hoping that it does not involve anyone associated with their religion. If it does then we see mass media coverage and unjustified animosity towards the religion – despite the fact that fundamentalist terrorists have nothing to do with the core principles of Islam.

The Quran, the holy book of Islam, states ‘do not commit aggression for surely, God does not love aggressors’. This is proof that the religion does not preach violence but, instead, peace. Evidently the ‘Islamic State’ is not Islamic at all. Those who say the religion encourages hatred and brutality are representatives of the narrow-minded, bigoted proportion of society who have no proof to back up their unreasonable prejudice. The problem lies where this manifestation has broadened and been spurred on by factors such as the media - which portrays terrorists as dark skinned, bearded, Islamic men in headscarves. Figures from ‘Huffpost’ show that out of the 1000 terrorist attacks in Europe over the period of the past 5 years, less than 2% of those terrorists are Muslim.

To add even more emphasis to the problem, here is one of many consequences of the discriminatory opinions that are circulating the British society: according to a report from Tell Mama, in February of last year a 38-year-old woman had her hijab grabbed and was repeatedly punched in the face so badly she needed surgery. As the organisation says, this was not an isolated incident; hate crimes against the Islamic religion are fast becoming seen by some as acts of bold defiance against terrorists. This attacker, evidently, was one of those who holds the opinion that ‘all Muslims are terrorists’ - a phrase worryingly heard too many times to count. Those who believe this need to open their limited minds to the bigger picture: the facts contradicting this statement can be clearly seen in black and white. More worrying, if possible, is that people are bringing up their children in a society that allows for, and endorses, this unfair preconception. If we are not careful, the future generation will also hold the delusional opinion that ‘all Muslims are terrorists’.
​
Terrorism from extremists – of any kind – is a huge worldwide problem which destroys and brings inarticulate fear to the lives of far too many. However, it is essential that we stop ignorantly misdirecting the blame; associating the word ‘Muslim’ with the word ‘terrorist’. The facts point to the opposite conclusion, and facts are what is needed in a time of uncertainty. In order to defeat terrorism, we must come together rather than unfairly pointing fingers and misdirecting hatred. In the words of Maya Angelou, a renowned civil rights activist, hate “has caused a lot of problems in this world, but it has not solved one yet.”

Create your own unique website with customizable templates.
Photo used under Creative Commons from photoshack 07
UA-121891675-1