What will Trump mean for the world? 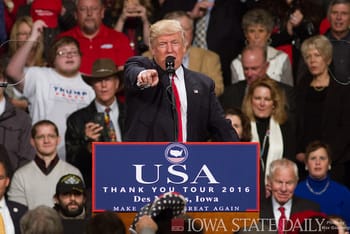 Those are the facts but it seems the US election was in a time where facts were irrelevant, many experts touting this election as one based on post-truth politics, where people are blind to the truth and allow their emotions to guide them. These emotions, which were mainly anger and hate, came from people’s boredom with the political elite; the idea that Washington doesn’t represent the common person; the idea even a hard working American can’t catch a break. According to CNN, 55% of the 235 million people eligible to vote did; meaning just under 130 million Americans voted in an election which will undoubtedly change the world we live in

I think it is safe to say, similar to Brexit, that we may all be tired of hearing about a poisonous election, which divided a nation that is supposed to be united. This article isn’t about documenting an outcome we already know, it’s about predicting what the outcome of a Trump presidency will be (based on fact this time and not emotion) and how the world may change for better or for worse.

The problem
Like Brexit, this election focused heavily on immigration-particularly from Mexico- industry, which has been on the decline in America, and economy, a major factor any successful president must address. The problem in America for the majority was that they felt they were not being represented by Washington’s elite however many felt they could relate to Trump, a man who embodied a true American who worked his way to the top, a patriotic man who loves America so much even his slogan, ‘Make America Great Again’, oozed patriotism.
End of world security?

In 1949, after the Second World War and the rise of the Soviet Union, America along with 11 other nations created NATO in order to prevent the spread of communism and preserve world peace. So to many, NATO (which stand for North Atlantic Treaty Organisation) is a good thing; however president elect Trump believes otherwise. Feeling that the members of NATO are ‘ungrateful allies who benefit from US largesse’. He wants to see countries such as Japan, Germany or South Korea ‘pay up’ to compensate for America defending them. Also to improve the national debt that, according to Trump at the final presidential debate, is ‘up to 20 trillion dollars’.

Trump wants compensation, otherwise he promises to pull America out of NATO, a decision that would cause international problems since it puts many countries in Europe and Asia at risk. Ukraine, which since 2014 has suffered great civil unrest with many pro-Russian groups wanting Russia to retake the once Soviet country, will be put at risk if America leaves NATO since a Russian invasion is possible if there are no US forces there to act as a deterrent.
Friend to foe to friend?

Trump’s very well-known affection for Russian leader Vladimir Putin scares many on the political scene. Although Russia and America were allies during World War Two, relations have been awful since then, with the cold war lasting almost half a century, the Cuban missile crisis putting the world at risk of nuclear war and the space race. Yet Mr Trump believes the tension that has accumulated over 70 years will be eradicated with his presidency, where he vows to improve relations with Putin who he believes to be a strong leader.

Currently the US and Russia are backing different sides in the Syrian civil war, which is in the global spotlight right now for its catastrophic impact on the Syrian population and the knock-on refugee crisis, but Trump and Putin wish to end the so-called Islamic state together, a war that would wreak havoc. So could a Trump Presidency see a seismic shift in political alliances and a new war emerge in the Middle East?
A leader who defies science?

‘Climate change is now affecting every country on every continent. It is disrupting national economies and affecting lives, costing people, communities and countries dearly today and even more tomorrow’. Those are the words of the United Nations, which campaigns strongly for a change in how we live our lives. We have all heard, and mostly agree that climate change is a great issue, if not the greatest. However president elect Trump disagrees; he wishes to ‘cancel’ the Paris climate change agreement, a historical agreement that was signed by 193 countries and sealed on the 12th December 2015 and put into effect on the 4th of November 2016, so it hasn’t even been in effect for two months and Trump already has plans to abort it.

But what are the risks of climate change and why does he not want to end it? Well overall, the earth is warming so ice is melting in the poles. This leads to more water in our ocean so more floodings, but also a hotter earth means more spread of desert, more animals killed, more disease spreading and lives lost because of a series of catastrophic events that will undoubtedly happen.
Trump does not want to agree to the talks since climate change is ‘fictional’. There you can see that Trump feels preventing climate change is harming the US economy. However, Trump may struggle according to the New York Times. Though Trump is capable of ‘weakening’ and slowing down climate change talks.

With America being the second largest greenhouse gas emitter in the world, a Trump presidency will surely increase American emissions since Obama campaigned strongly for renewable energy and less coal consumption.