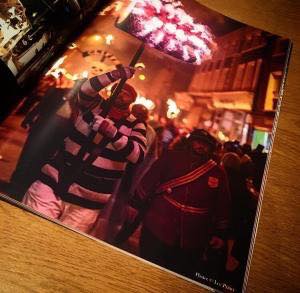 Members of Borough Bonfire society were told not to dress in traditional First Pioneer costumes this year at Lewes Bonfire after their ‘blacking up’ sparked allegations of racism. The event, held on the 5th November (Guy Fawkes Night), is a commemoration which was first annually started in the early seventeenth century and attracts thousands of visitors each year.

One of its appeals, in addition to the bonfire and impressive firework display, is witnessing the quirky outfits that societies dress up in. The Zulu tribesmen costumes are an annual tradition; however, there has recently been speculation over the ‘blacking up’ of faces to darken the wearer’s skin tones to that of an African tribe member. Some members of the public view this as a racist practice and a petition was set up to ban the controversial custom.

The society members have had this long-established addition to their costume for hundreds of years. With our modern awareness and intolerance of racism, though, people have begun to make complaints over the “racist” face paint. They claim that ethnic minorities in Lewes and East Sussex, both not racially diverse areas of the country, are made to feel unsafe and see the act of ‘blacking up’ as a caricature. It is thought to cause division within communities and make groups feel segregated and oppressed.

Sue, who has been a member of Cliff Bonfire Society for 40 over years, claimed: “People are jumping on the bandwagon, and making an issue where there isn’t one”. In her opinion, “it is a tradition - and no one has ever seen it as racism before”.

This year, Borough were joined by Zulu dancers from KwaZulu, Natal. Thandanani Gumede, one of the dance troupe, said he was “flattered” at the dressing up, and did not view it as “derogatory”. According to Gumede, for once “there were people trying to look like me as opposed to saying it is wrong to look like me.”
The petition reached over one thousand signatures and, in the end, the tradition was discontinued. The night, however, remained as spectacular as ever: an immensely popular occasion full of colour, entertainment and action.