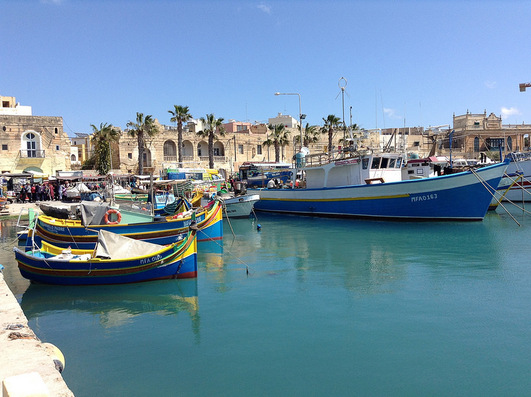 When we booked a day trip around Malta in a touring boat, we thought it was a good idea. However, as we clambered onto the small, packed-out boat, the thought of spending the rest of the day onboard wasn’t an appealing thought. The weather was, without a doubt, the hottest Mediterranean heat we had experienced on our visit so far. Luckily, my attitude toward this soon changed as we began to whip across the vast sea, our dangling legs cooled by the white spray that splashed up over us every time the nose of the boat dived downwards.

Until this point, our trip to Malta had been generally uneventful. Sapped by the overwhelming heat, we had ended up cancelling our adventurous plans of exploring the island and riding along the coast on horseback. Instead, we chose to lounge by the pool and bask in the glory of our air conditioning, which was greatly appreciated on an island that didn’t drop below forty degrees until after sunset.

Touring a boat around the island seemed like a good compromise - an interesting event that would be acceptable to tell the in-laws upon our return, and something that didn’t require too much effort or inevitably provide us with bouts of sunstroke.

We were initially greeted by a small, friendly (unfairly tanned) local, who spoke impeccable English (we were grateful for the fact that Malta’s main languages were English and Maltese). He then talked us through the stops of the day and made us aware of the on-board facilities – toilets, showers, drinks, hot food, cold food and even scuba diving equipment. Not too shabby for a little boat that was easily filled by about twenty people.

Our first stop was the caves, and then some other caves and then more caves. Impressive the first couple of times, but after about the fifth cave, you become aware that you’re basically just staring at a big rock with a hole in it. There was nothing particularly special about these caves - no sparkly rocks, no mysterious creatures or plant life and they weren’t even big enough for our half-boat to fit into. The water below was clear though, I guess, and they offered welcome relief from the glaring sun for a few minutes. Useful, but in all honesty, not that exciting.

So, after seeing about the hundredth scraggly rock, loosely known as a ‘cave’ we headed to a main tourist attraction called ‘Blue Lagoon’. Cameras on stand-by, we sped off once more into the vast unknown blue. Just why this place was called ‘Blue Lagoon’ we immediately discovered upon arrival: the clue was in the name really. Awash with people splashing about in the warmth of the sea, the Lagoon twinkled under the midday sun, stealing your breath as it drew your attention to the clear water, which showcased every shade of blue from teal to royal and back again to sky. The clarity of the water meant you could see every single grain of sand below, and the schools of tiny fish that swam sluggishly about. Upon docking, the entire population on-board our boat grabbed the snorkels and promptly threw themselves into the water which, despite its warmth and impressive colour, had deceived us in regards to its depth. My feet didn’t even reach a quarter of the way down: needless to say, I stuck pretty close to the boat and was thankful for the thick rope draped around it. Snorkelling out into the depth of the choppy sea with no protection or way out? I’ll pass.

After scrabbling back to the safety of the boat, it wasn’t long before we were setting out again and making use of its onboard snacks and refreshing drinks. Having finished our sandwiches, ice creams and colas, we settled down at the nose of the boat, allowing the sea spray to cool us once more. Despite the fact that it took us half an hour to get to our next and final stop, I can safely say the last location was well worth the wait.

Our final destination was a place of true beauty. Tucked away from all others was a small section of turquoise sea which levelled off into a cave - and a real one this time. Mooring once more against a rock, we repeated procedure and leapt off the boat into the sea. Although only slightly more shallow than the ‘Blue Lagoon’, I immediately preferred this location- one swift glance underwater made me aware of the thousands of fish swimming around me. A parade of colours, shapes and sizes swam, swapping directions, hunting for food that anyone had kindly thrown in. They were careful to swim slightly deeper when we went past, avoiding any contact with us, for which I was grateful. Swimming to the cave, we discovered a natural beach had formed inside, running parallel with more sea, giving you the choice to walk or swim into the cave. Since the unknown is something I try to avoid, I opted to walk along the sand instead of swim in the now dark water with mysterious fish. After gawping at the cave, we snorkelled back to the boat, pointing out the most interesting and colourful underwater life along the way. The boat then returned us home, where we rested contentedly in the air conditioning once again, reflecting on the day’s events. After our discussion though, we discovered there was one thing we were all decided on; when we booked a day trip around Malta in a touring boat, it was definitely a good idea. So, fellow traveller, if there’s one piece of advice I can give you, it’s to never allow anything (even extreme weather) to stop you from creating lifelong memories.

Create your own unique website with customizable templates.
Photo used under Creative Commons from Jorge from Brazil
UA-121891675-1