Stop, think, spell and punctuate. Or else. 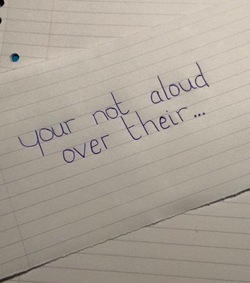 I like to think that the English Language is like a woman: complex and beautiful. She can be difficult to interpret, but you cannot live without her. She may not be entirely consistent, but you should never disobey her rules. She is simply stunning.

Or is she? The way some people trample all over her makes me think twice. I consider myself to be liberal in many areas, but this is not one of them. I shall not stand idly by as my native tongue is being thrown out of the window onto the thorn bushes below. There are many issues with grammar in modern English, but with great difficulty I have managed to pick a top three.

Is it too much to ask that the use of ‘ain’t’ ceases immediately?  It is not practical in any way. It does not save you time neither does it help you explain things more clearly. Why use it? Is it an attempt to escape from the repressive expectations of language set by the older generations? Is it that young people are now pressured into using a nonsensical word in order to fit in? Is it cool to be labelled as young and rebellious if you do not make sense?

The fierce and seemingly unending battle between your and you’re continues to plague written English. If I am reading your Facebook post and you use the incorrect term, I shall most definitely make a purse-lipped disapproving face, most likely followed by an exasperated sigh. It takes a mere second to think ‘you are’ before making the most terrible mistake in our Facebook friendship.

My pet hate of incorrect grammar is the double negative, the commonly heard, “I didn’t do nothing.” So if you didn't do nothing, you did something? And if you didn't do anything, you did nothing? Whenever I hear this epitome of incorrect grammar being uttered, I can barely refrain from shouting, “Anything! You didn’t do anything!” This cannot even be considered a colloquialism, in my opinion – it is just wrong.

The English language has become a damsel in distress teetering on the edge of her encroaching demise. English is one of the most widely used languages in the world, but the rest of the world cannot stop to appreciate her beauty if she cannot be understood.