Cologne: crimes against women and prejudice against refugees 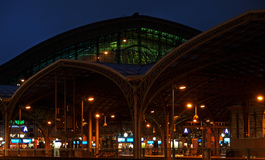 The first day of 2016 was far from a happy new year for many members of the German public. In the west German city of Cologne, in Hamburg and other cities across Germany, a significant number of women were sexually assaulted, robbed and harassed by large groups of drunk and aggressive men. At Cologne Central Station women were attacked by a gang of perpetrators who were reported of being of North African or Arabic origin. What makes it particularly disturbing is that these attacks appeared to have been organised and carried out by at least 1000 men. These acts were terrible - they not only degrade the women involved but have also had a terrible impact on the refugee situation in Germany as misguided and vindictive commentators have tried to directly link asylum seekers to the sex crimes.

The events of New Year’s Eve have sparked a wave of political demonstrations in Cologne and across Germany. They have allowed political activists to further their own viewpoints. Many right-winged, Anti-Islamic organisations have blamed and are continuing to blame the refugees for these dehumanising attacks. Tommy Robinson, ex-leader of the English Defence League, spoke at one of the demonstrations as part of PEGIDA (Patriotic Europeans Against the Islamisation of the West) in Cologne a few weeks after the attacks. PEGIDA is a far right wing neo-nazi movement who demand higher restrictions on immigration and refuse to integrate with the refugees. In his speech at the rally Robinson was reported as saying ‘Angela Merkel is handing out the birth rights of Germans like she is handing out sweets to children.’

He argued that it is not just Germany that suffers from these specifically Muslim attacks it is the whole of Europe; at one point he even suggested that if there were no Muslim men in Sweden there wouldn’t have been any rape cases last year. Clearly this is nonsense – and worse still it is dangerous nonsense, because some people, however small a minority, are listening and thinking that what he says might be true. Despite the fact that thousands of instances of sexual abuse occur every single day in every single country across Europe – the overwhelming majority between people of the same nationality.
Yet Robinson is not alone in putting the entire blame on all refugees and this style of anti-asylum rhetoric has had devastating consequences. There have been ‘revenge attacks’ on refugee shelters, shops and small restaurants, traumatising the innocent and dispossessed even further. There have been reports of smashing windows, fireworks thrown and mobs attacking vulnerable passers-by who appear to be of Arabic origin.

Every nation has its criminals. Those who perpetrated the attacks, wherever they were born, do not represent any general public or nationality.
Asylum seekers across Germany are unified in shock and disgust at the attacks. Syrian refugees have been handing out flowers to female members of the public as a token to show that they are against violence. Some have also taken part in small demonstrations, holding placards that read ‘No to sexism, no to racism’ and ‘We respect the values of German society.’ A short documentary by the BBC (Stacey Dooley in Cologne: The Blame Game) also shows a dignified response by one refugee from Somalia. He was asked ‘There are some people who have issues with other people coming into their country. What would you say to them?’ his reply was ‘I think Germany is democratic so that is their opinion. So I’m not ignoring their ideas. But also they are my friends, my brothers.’ It took him five months to get to Germany – throughout the whole interview he was continually thanking the country for taking him in because now he is safe.

Refugees must not be used as scapegoats for what happened at new year in Cologne. There are some men in the world who view women as sexual objects and targets – this needs addressing. It isn’t about a single religion or a single culture. Look back at our coverage of rape jokes to see just how mainstream sexual objectification and misogyny can be.  Scapegoating refugees isn’t simply wrong and racist, it’s distracting from a bigger, wider issue.
Men need to be held accountable for violence against women, whether it’s in public or in the home. Victims need and deserve support and justice. This is not a story about asylum seekers; it’s a story about crimes against women.

Create your own unique website with customizable templates.
Photo used under Creative Commons from mararie
UA-121891675-1