Rugby World Cup 2015: a tragedy played in the Group Stage 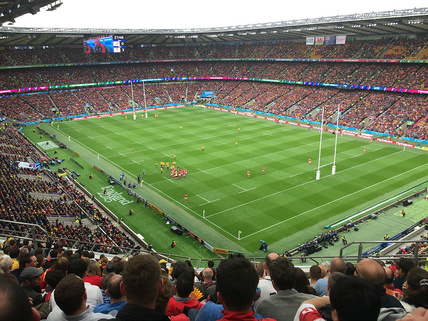 The 2015 Rugby World Cup was a tournament that, from an English perspective, was built up only to let us down. A disappointing group stage saw England bow out after only three games. Crushing defeats to Australia and Wales saw the hosts exit the tournament after a promising looking build-up which saw them lose only to France in their six world cup warm-up games. It was, however not so bad for the other host nations involved. Wales and Scotland both took second place in their pools, setting up a quarter final with South Africa for Wales and Australia for Scotland, while Ireland topped their group setting up a quarter final clash with Argentina, on paper the easiest game out of all of them.

England’s world cup was a short but exciting one for the neutrals, but was torture for anyone who supported them. They made a seemingly promising start against Fiji where England chalked up a 35 – 11 win, earning themselves four points for their first game. This, however, proved to be their only points for the next two games after narrowly losing to Wales after an ill-disciplined performance and an immaculate kicking display from the Welsh fly-half Dan Biggar. They then completely capitulated against Australia who scored 33 points through their fly-half Bernard Foley. This left a rather sour taste in the mouths of the English as the two losses meant that they were out of their own tournament after only three games. They then ended their World Cup campaign with a 60 – 3 rout of Uruguay, scoring ten tries in the process and giving their fans something to cheer about at the end of a very disappointing world cup.

Wales, Scotland and Ireland all fared far better than England, all qualifying for the knockout stages though only Ireland qualified as group winners and therefore got statistically the simplest game against Argentina. Wales narrowly missed out on topping pool A after an immense defensive display from Australia which saw them go two men down after getting two yellow cards in the space of three minutes. There was then near ceaseless pressure right on the edges of the Australian try line, though no tries were scored. The game ended 15 – 6 in Australia’s favour and was hailed by the Australian captain Stephen Moore as ‘the best piece of defending he has ever been a part of or possibly ever seen’. This result set up a quarter final clash with Scotland where Australia were seen as slight favorites for the game. Ireland were the only ones out of the home nations to top their group beating France for the first time ever in a World Cup in this crucial group decider, running out as eventual 24 – 9 winners.

Although for the English the world cup can be seen as a disappointment there were still many other reasons that many have hailed England 2015 as the best ever Rugby World Cup. It has to be said that many of the highlights of the tournament came from the so called ‘tier 1’ teams such as Japan, Samoa and Georgia. Whilst many of the big teams struggled to get into top gear straight away the tier 1 teams managed to play their best stuff straight from the off and Japan showed this by getting their World Cup Campaign off to a flying start by beating South Africa in one of the biggest World Cup upsets ever. Although most of these teams failed to qualify for the knockout stages they still played some of the best Rugby we have seen so far.  Murray Jacobsen y13

Create your own unique website with customizable templates.
Photo used under Creative Commons from dairoberts
UA-121891675-1