Hallowe'en: the ghost of tradition past 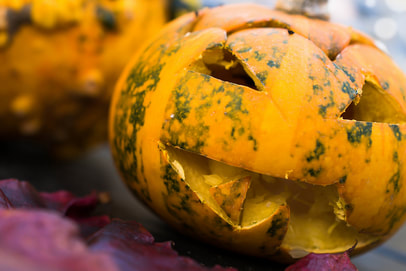 So it is that scary time of year once again. Hallowe’en. To some, it's time where you go from door to door dressed up asking for sweets. For others it's a time to throw parties and have fun with all your friends. And for the rest it's a time to use the
Jack o'lantern emoji at inappropriate times. 🎃

But in all this fun, some people never really stop to think what other times and countries do for these festivities.

So let’s start with our interpretation of Hallowe’en. Where did it come from? Well it came from pagan religions such as the druids who believe that, on Hallowe’en, the barrier between the human world and the spirit world was at its weakest and spirits and ghosts could pass into our world. The idea of dressing up came from the belief that disguising as a monster would make the spirits think that you were one of them and leave you alone. Even Jack O'Lanterns have an interesting story behind them. It comes from an Irish myth called Stingy Jack. Supposedly Jack was a horrible drunkard who played tricks on everyone. One day he decided to play a trick on the devil himself and tricked him into climbing an apple tree but once he was at the top, Jack placed crosses around the tree so the devil could not get down. Eventually they made a deal. Jack would remove the crosses allowing the devil to get down and in return, the devil was not allowed to take his soul. Many years later, he died and stood at the gate to heaven, however Saint Peter did not allow him into heaven as he was cruel. But of course, the devil could not take his soul either. So he was forced into Purgatory for the rest of eternity. However the devil gave him an ember and a turnip. Jack carved a face on the turnip and placed an ember in it. Now he wanders the land as a ghost with his only light being his turnip. Now we have a tradition of carving and putting a candle in a... turnip? Don't worry. They changed it to a pumpkin later on. A pumpkin was honestly a better choice because, of all the vegetables, a turnip is the least scary.

Although Halloween is a fairly Western tradition, there are other countries that celebrate it with different names and practices. Take, for example, Mexico's Day of the Dead. Mexico believes that this time is a time for worshipping dead loved ones. This can be leaving offerings on alters or praying to them. But there are also lesser known cultures such as China's "Yue Lan" or the "Hungry Ghost Festival" in which people burn pictures of money and other pleasures for their ancestors.

Cats, spiders and bats are all common in superstitions. The reason is that back in the middle ages, when the witch hunts occurred, it was believed that these three animals were common witches’ familiars, creatures sent by the devil to help them. Such Hallowe’en related superstitions include thinking that someone in your house will die if a bat flies three times around your house, thinking that seeing a black cat is bad luck and that if you see a spider on Hallowe’en, it's the spirit of a dead loved one watching over you.