A fight to the finish for Wawrinka at the Australian Open 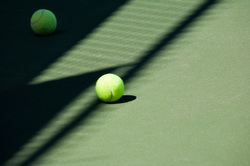 Australian Open Men’s Final:  Rafael Nadal v Stanislas Wawrinka
The Australian Open this year proved to be even more dramatic than ever. Murray went out in the quarter finals along with Novak Djokovic.  Spain’s number one Rafael Nadal was the number one seed coming in to the tournament whereas Wawrinka was only seeded number eight.  Wawrinka had been on form throughout the tournament: winning his quarter final against Serbian Novak Djokovic and his semi final against Czech number one Tomas Berdych, although that was a very tough match with three sets being decided by a tiebreak.  Meanwhile Nadal had been beating player after player in straight sets; he had even beaten Roger Federer in straight sets!  So the chances of Nadal beating Wawrinka were high despite Stanislas’ great form.
Coming into the match everyone was expecting the match to be a walk in the park for Nadal and that Wawrinka would be left red faced with
embarrassment.  However Wawrinka attacked immediately and showed Nadal what he was made of.
The first set was over in around half an hour with Wawrinka taking it 6-3.
During the second set, Rafael Nadal appeared to suffer a back injury.  He had medical support on court to try and help with his injury.
This helped Nadal as he started to play better. Nadal’s medical time outs during the second set didn’t upset Wawrinka’s rhythm though, and he won it
6-2.
Other players may have retired by this point in the match but that is not Rafael Nadal’s style.  He is a fighter and he never gives up. Besides, that wasn’t the way Wawrinka  would have wanted to win his first Grand Slam tournament.  Nadal fought hard and took the third set from Wawrinka with the score of
the set being 3-6.  Wawrinka needed this next set or it would go to the fifth set and Nadal could have taken the match.  For Wawrinka winning the fourth set was crucial!  However Nadal couldn’t fight any longer.
Wawrinka had won his first ever Grand Slam against the world number one; 6-3, 6-2, 3-6, 6-3.
Nadal may have been injured, but Wawrinka still played extremely well.  People should not remember this match as Wawrinka winning because Nadal was injured, because for the first set Wawrinka was playing better than Nadal and was in charge of the match.  Not only did Stanislas Wawrinka deserve his victory, but he needed the victory to show just how good he really is, that he deserves to be world number three and to show people he is a real threat in the future.