On top of the world: climbing Toubkal 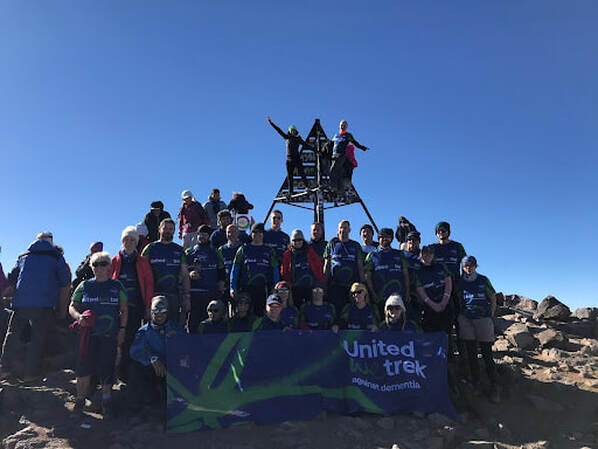 What is it really like to climb a mountain? Etta Stubbings finds out more


Back in 2018 my mum, Jessica Stubbings, took on the daring challenge of climbing Mount Toubkal, the highest mountain in Northern Africa at 4167m, to raise money for The Alzheimer’s society. She shared her experiences of climbing in the Atlas Mountains and revealed what it is about hiking up treacherous mountains that entices so many people.

Jessica wanted to complete the challenge because she felt like doing something special and impactful to mark turning 40 and took the chance to help a charity close to her heart. The Alzheimer’s Society is a charity that provides funding for research to find a cure and support people living with this devastating disease. Jessica got people to sponsor her in climbing Mount Toubkal to raise money for this important cause; if you want to find more about The Alzheimer’s Society, take a look at their website which contains more details on what they do and how you can support them.

Jessica also wanted to discover more about Moroccan culture and experience the thrill and adventure of climbing up the tallest mountain in Northern Africa. A main aspect of Moroccan culture that she experienced was the food. They had food cooked for them every night which mainly consisted of tagines (a kind of meat stew) and couscous which are classic Moroccan meals. Jessica also mentioned that there were many villages in the Atlas Mountains that were very remote and poor, very different to the larger cities that she had visited before such as Marrakesh.

When asked what motivated her to keep going, even when it seemed impossible, Jessica said that “The thought of reaching the summit drove me on” as well as being in a group with other people who all had the same goal and helped to encourage and support her. The thought that this was all for a good cause and that she didn’t want to disappoint those who had sponsored her also made her even more determined to reach her goal.

Obviously, during such an ambitious challenge, there are going to be obstacles which make the experience even more demanding. This trek was no exception and Jessica said that the hardest part was the descent on the way down as it “seemed never-ending” and the excitement of reaching the summit had worn off and she just wanted to get back to the base camp.

The altitude sickness was another problem that Jessica faced, due to being over 4000m above sea level, but she did not let this stop her and powered on. Jessica said that the highlight of her adventure was reaching the peak and looking out across the view of the Atlas Mountains. "It made the whole climb seem worthwhile and helped to remind me of the cause I was helping by completing the adventure."

So, what exactly is it about climbing mountains that entices so many people? Jessica's first response was simply “The feeling of being on top of the world!” which I think perfectly encapsulates the whole incentive of mountaineering. "There is always a clear goal that brings you great satisfaction when you complete it. The adventure that you embark on brings a new respect for the wonders of nature and helps you experience something new every time."