​Pepsi opens up a can of worms 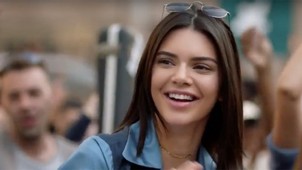 Advertising can be a powerful marketing tool, when it’s done properly. When it’s not, however, it will attract an audience - but perhaps for all the wrong reasons.

If you’ve been keeping up with the news, you’ll have come across a rather shameful campaign launched by one of the largest global manufacturers of fizzy beverage: Pepsi. In a nutshell, Kendall Jenner appears fresh from the photoshoot to contribute to a protest…by giving a police officer a can of the sugary bev as some kind of peace offering. And of course, rather than bringing out the Taser or pinning down the star of Keeping up with the Kardashians, the officer shrugs it off, smiles, rolls his eyes, and accepts the offering. Ah, peace is restored. If only protestors had been informed of this carbonated witchcraft sooner.

Of course, the campaign was greeted with controversy from all sides of social media. Mostly, the response to the advert was that it was ‘tone-deaf’ and made a mockery of current events such as Black Lives Matter protests and issues with protesters and police. It has even been likened to the famous image of Black Lives Matter protestor Leshia Evans approaching two policemen, after which point she was later grabbed and dragged away by the same men: 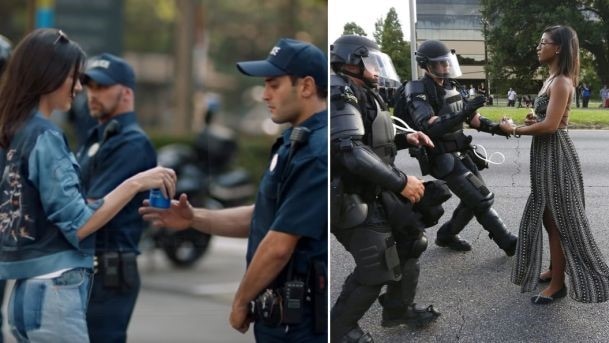 ​Pepsi later pulled the campaign and aired an apology:
​ 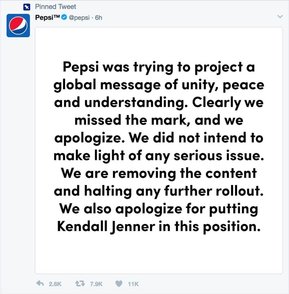 ​​This sparked further controversy, for obvious reasons. Many pointed out that Jenner is a grown woman capable of making decisions for herself, therefore an apology to her was highly inappropriate given she had every opportunity to drop out of the campaign, having been previously informed as to what it was about. In amongst the backlash from the campaign, Kendall herself showed no sign of apology to protestors and supporters of campaigns such as the Black Lives Matter movement: those affected most greatly by the advertisement.
But it wasn’t just Pepsi that made an advertising faux-pas this week. Nivea also launched their new ‘White is Purity’ campaign, depicting a woman in all-white, surrounded by white bedding, gazing out of a white window. They might as well have launched the campaign with a perhaps more catchy ‘I’m Not Racist But…’.

Like Pepsi’s, the advertisement was once again, naturally, dropped. So not only did this week of advertising cause a few huge corporations to lose a lot of money on wasted campaigns (every cloud, I guess) they also, more importantly, portrayed a society fuelled by white supremacy and sheer blindness to human rights movements that are so incredibly important in an era of Trump and alt-right madness.

This isn’t the first time advertising has missed the mark. In 2006, Sony launched an ad for the horrendously named ‘PlayStation Portable White’ depicting a fierce-looking white woman grabbing the face of a frightened-looking black woman. Just last month, in fact, Chinese laundry company Qiaobi released a bonkers campaign showing a black man go through a washing machine and come out as a white man, much to the delight of the white woman who pushed him in. And just last week, even Tesco released an almost comically-terrible ad claiming that ‘Good Friday just got better’…because they dropped their beer prices. Perhaps a better and less misleading campaign would have been ‘Join us in celebrating the Crucifixion of Christ with cheap Stella!’

We may laugh, because these adverts are, quite frankly, so overtly and horrendously offensive that they may as well have been thought up by a pack of comedy-writing monkeys. But on a more serious note, is it worrying that companies are getting advertising so wrong, even in 2017? How much gravitas does advertising really have within society? We often fast forward advertising on TV, or pay no attention to it as we impatiently wait for whatever we’re watching to come back on. Billboards are often used as a canvas for graffiti, we can skip advertisements on YouTube and on apps and games on our phones, and we eventually become desensitised to huge, electronic screens displaying ads upon ads in the streets of London and New York. Are we over-exposed to advertisement, then? Does this mean that, in the long run, these offensive campaigns will be forgotten as worse campaigns compete for top spot, and we become more and more apathetic towards the concept of advertising as a whole?

Maybe. But this does not mean that these advertisements should be forgotten. An advertisement does more than represent a company; it can represent an entire generation of people - as Pepsi tried, and catastrophically failed, at doing. Think back to when the Fairy ads used to portray young girls washing up with their mums, normalising the idea that it was the responsibility of females to complete domestic tasks. This is why - regardless of whether we pay much attention to it – it is so important for advertising to be done right. Done wrong, and it can mislead an entire generation.

By Lucy Powderly, Year 13
Powered by