The horrors of suburbia in Blue Velvet: behind the picket fence 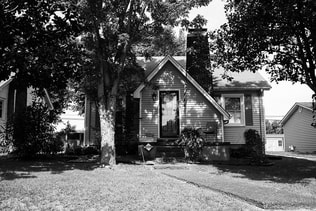 ‘Blue skies. Pan slowly down to a clean white picket fence, with beautiful red roses in front of it. Birds chirp in the distance. A faint sprinkler sound is heard. Very sweet music is playing,’ details Lynch in the opening of his 1986 surrealist horror film, Blue Velvet. As soon as the curtain lifts, the viewer is greeted with sweet and serene images of the idyllic image of North American suburbia: white picket fences; singing birds; smiling children; a beautifully red fire truck. And then, without warning, we are plunged under the skin of the facade of tranquillity and charm into the undergrowth of the green, green grasses. Insects squirm and ear-crunching, skin-crawling sound design dominates the screen. This is the juxtaposing opening sequence for the arrival of Jeffrey, a college student who returns home to visit his father who recently fell ill - coincidentally, just as events become strange. Lynch’s opening scenes are renowned for revealing important information that comes into focus later on when deciphering the mystery (think Mulholland Drive, with the bombastic jitterbug sequence and the proceeding dream commentary in the diner). Blue Velvet, however, establishes no hidden clues, instead presenting a slightly existential allegory for the theme that Lynch explores so specifically in the film - the horrors beneath the carpet of suburbia.

Perhaps the most accurate way to describe Lynch’s aesthetics as a director is the surrealism of Americana. Oily industrialism, sleazy neon motels and bars, lumberjack cladden bikers in tall pine forests, and long dark roads stretching through the Southern American desert landscape seem to populate Lynch’s vision of America. They’re stylised through rich, textured cinematography and deep, unsettling sound design - as well as an atmospheric soundtrack that is simultaneously dreamlike and disturbed. Lynch strives to explore unsettling themes and portray often terrifying images amongst landmarks of American heritage, captured beautifully, to establish the relationship between American culture and darker issues, such as sexual abuse, drug misuse and gun violence - all shrouded beneath the cloak of horrifying surrealism. Once again, Blue Velvet strays from this Lynchian typicality. Yes, Lynch's Americana is just as prevalent as it always is, with its pristine suburbs, retro diners and sleazy, neon-washed bars. And, yes, Lynch is portraying the subordination of women through sexual fetichism as well as police corruption and syndicate violence. What is odd, though, for a Lynchian film, is the lack of blatant surrealism.

A fan of surrealism in early film and in literature, admiring the works of artists and authors such as Kafka, Lynch's career is bubbling with the surreal. From the mysterious Eraserhead, in which the protagonist is given parental control over his strange, deformed alien-like child in a whirl of sexual and social allegories, to snippets of bizarre yet no less symbolic images such as the various crash victims in Wild At Heart, even Lynch's most accessible works (like The Straight Story and The Elephant Man) contain surreal characters and plotlines that daze and confuse. So why is Blue Velvet devoid of such obvious surrealism? The story does not rely on it as a major plot device, nor does it rely on other common aspects of Lynch's works such as fractured narratives or serious dream logic. Instead, Lynch portrays the characters of Frank Booth, his associates and the weird guy who sings In Dreams with a lamp in place of a microphone as incredibly surreal. The garish, bombastic and simultaneously dark and noir-like dress code that the characters are emblazoned in paint a bizarre picture that, aesthetically, works so perfectly with their night time playground. The behaviour of these characters is often erratic, none more so than Frank Booth's, who Lynch directed to be melodramatic in his performance, screaming expletives with rage but often a childlike humiliation that is captured perfectly by Dennis Hopper. His Freudian sexual discourse, fetish for blue velvet and frequent use of an unknown gas via an ominous looking gas mask (likely to be a substance that arouses) do, in fact, make him as surreal as any good Lynchian character.

Other images in the film, such as the severed ear (which Lynch once envisioned in a dream) leading Jeffery to his involvement in Dorothy's exploitation, is disturbing and incredibly striking; an image that, along with the fetishist gas mask, is the one that people tend to remember most about the film. In fact, the entire situation seems surreal - an Italian singer from a sleazy bar is regularly raped in order to perpetuate the safety of her husband and child - when contrasted to the beauty of daytime Americana.

And that's it. That's Lynch's point.

The horrifying absurdity of two confused teenagers attempting to save Dorothy from her circle of rape and exploitation, one that is solicited by a gang of vulgar and bizarre middle-aged deviants, completely juxtaposes tall glasses of cherry coke in a lusciously red diner and the suburban symbol of the white fence. The surrealism comes in the juxtaposition between the normal and the insane; the beautiful and the repulsive; the privileged and the exploited; the darkness and the daytime.

Upon dozens of viewings of the film - all of Lynch's works, in fact - the most striking thing about them is their cinematography. That iconic opening image of a blindingly blue sky and the heavenly white fence establish a clear aesthetic for the day: the facade of Northern American suburbia, in all of its well-trimmed, polite, middle-class glory. The striking moment for me - that moment when we transcend this surface, that can seemingly only present itself so beautifully in daylight hours - is when Jeffrey first visits the bar that Dorothy sings at. As soon as his car enters the vicinity of the bar, its front bumper is penetrated by a striking red light that proceeds to engulf the reflection from the bumper as well as Jeffrey's face. It is not the velvet red of the roses in the gardens. It is off. It is almost pink, and bathes everything in a neon haze - which is typical of Lynch's Americana. It is in this moment that the daylight is replaced by a more sinister and artificial light; one that paves the way for the unfavourable to creep to the darkened surface of the night. And once darkness has hit, the time has come for immorality to appear. In the film, we never see Frank Booth's character (except, symbolically, in disguise) during the daylight, as if he is some creature hiding in the cover of darkness. Lynch uses the symbol of a candle to represent this idea: the candle roars and burns during Jeffrey's moments considering moral decisions. And these bright, noisy flame goes out only when he hits Dorothy to her request. The darkness represents his lowest moral level.

The light in Blue Velvet seems to represent nothing more but the facade of darkness. Perhaps one of the most disturbingly surreal images is when Jeffrey and Sandy are driving home from a party, and Dorothy emerges from the undergrowth in the suburbs, completely naked and blackened from bruises. She runs towards Jeffrey, and resides next to Sandy for the duration of her naked appearance. Sandy is somewhat subordinated by ideas around the role of a woman this suburban nightmare, excluded due to it being deemed too dangerous for a girl, therefore making her the symbol of the suburban facade in the film. She is deemed too beautiful and fragile to enter into this darkness, and Lynch symbolises this through the white dress that she wears when accompanying Jeffrey to the party. The striking image of Dorothy in her bruised and bare skin - Rossini has said that she tried to act like a ‘hanging carcass’ in her scenes of nudity in order to portray the damaging effects of sexual abuse on self-image and sexuality - stood next to the pure, white Sandy creates yet another juxtaposition that highlights the surreal.

The last symbol I would like to reference is that of the insects from the very opening sequence, for it is the bugs in the undergrowth that are our very first glimpse, albeit symbolic, into the horrors of suburbia. The bugs are next seen populating the severed ear of Dorothy's kidnapped husband, feeding from it, much like Frank will sickeningly benefit from the loss of the ear and the fear it will drive into Dorothy. Bugs then become the scapegoat for Jeffrey's investigation into Dorothy's apartment, as he inconspicuously ambles in, posed to exterminate insects - an image that he attempts to fulfil throughout the film. Interestingly, insects are only ever seen hiding and feasting during the daylight hours, much like the antagonists of the film. Is Lynch calling them insects - subhuman? Probably not, considering he's a strict libertarian. However, he draws striking parallels between the two to showcase the disgusting nature of the syndicate.

As Lynch draws these parallels, and creates deep juxtaposition, an image is created. It is one of beauty in a privileged, suburban logging town in North America, where the sky is the colour of blue velvet and the fences whiter than the vanilla milkshakes in the local diner. It is also one of a contrasting world that exists in the exact same place; a sleazy Americana, inhabited by vicious gangs, and haunted by the helpless victims of rape and torture. However, the over-the-top beauty of the daylight and the absurdity of everything from the characters' weird fetishisms and styles to their melodramatic tendencies during the darkness clash and juxtapose in order to leave one remainder in the middle of these two opposite ends of the spectrum. Surrealism, yes. Even more visible than this surrealism, though, is the horror. The horrors beneath the skin of surburbia, lurking like crawling insects, sheltered in the undergrowth from the bright sky, bluer than velvet.

​Morgan Till, Year 12
Powered by

Create your own unique website with customizable templates.
Photo used under Creative Commons from vhines200
UA-121891675-1