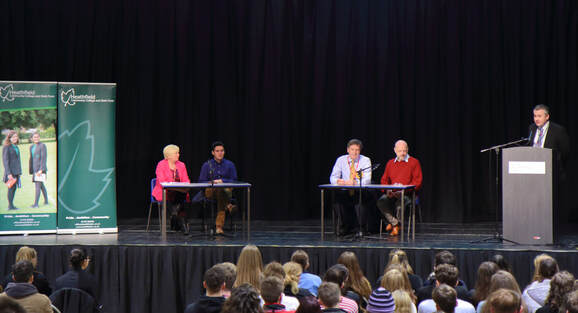 Politics often seems like a world away from our school. Middle-aged middle class white men sit in ancient chambers, discussing issues which seem in a different sphere to our day-to-day thoughts of Geography assessments and too much homework. Many of us see politics as deadly dull and dreary, something to be avoided at all costs. However, on Friday 6 December, politics came and sat on our stage and answered our questions. No longer was politics dusty and distant, but now it covered issues such as climate change and adolescent mental health.

We invited the four candidates standing for local election: Labour’s Christine Bayliss, Liberal Democrats’ Martin Saunders, Green Party’s Jonathan Kent, and our current Conservative MP, Huw Merriman. At such a busy time for them, the fact that they all took time out of their schedules to spend over two hours talking to teenagers, most of whom couldn’t even vote, is commendable. They all engaged with our questions, even when they were very challenging to answer, such as Jack Baldwin’s question about anti-Semitism in the Labour Party. There was no easy answer to this, and Christine Bayliss did very well in answering, apologising for taking so long as a party to act, and promising that they were. For answering our questions, I’d like to thank them all.

This election comes at one of the most polarised times in politics, both nationally and worldwide. Anti-refugee rhetoric battles with strident EU-support. Whilst Donald Trump denies the existence of climate change, millions of teenagers across the world are jeopardising their exams by missing school, marching for the environment to send a message that the evasive behaviour of generations before us is no longer acceptable. Whilst our candidates had different views, all Remain-voters and yet polarised on the correct course of action on the EU, they displayed a courtesy and maturity often missing from political debates, acknowledging each others’ views, even when they did not agree (and pulling some excellent facial expressions to show their disagreement). They refused to descend to the inflammatory language of political leaders such as Boris Johnson (no one was called a “big girl’s blouse” or “traitor”) and so all did their parties proud.

Huw Merriman, MP for Bexhill and Battle since 2015, campaigns for a seat that has been Tory blue since the constituency was created in 1983. As far as any politician can expect a win, he can, and yet in the volatile political climate, even safe seats can be lost. Therefore, hustings like these are not just technicalities, but essential times for him to convince voters that he should represent us again. Perhaps, for the first time, the seat will change colour.

The questions asked by students ranged from climate change protests to US involvement in the NHS. Perhaps the most memorable moment was Jonathan Kent’s emotion over students’ passion for the environment, causing him to become choked up at several occasions. Based on the volume of applause, he was the most popular with students, many of whom came to shake his hand afterwards. To see a politician truly connect with his words was unusual, and likely to endear him to a group of teenagers who have grown up with lies over Brexit and so are sick of the façades of politics.

Huw Merriman’s stance on the climate, in contrast, has been criticised on a number of occasions that he has come to the school. It shows his dedication to both the school and the constituency that he keeps coming back to be challenged! He’s voted eleven times against environmental measures and justifies it by saying that he must vote against opposition motions to avoid undermining his own government, and that China is the more worrying threat to the environment. In response to Helena Permaul’s question on climate strikes, he seemed reluctant to endorse the protests, suggesting that our time as students is better spent in education. In an election so consumed by environmental problems, especially amongst the younger voters, this stance may cost him dearly.

Martin Saunders, yellow rosette and tie proclaiming his party colours, had a lot he wanted to say.  He got a good few rounds of applause, perhaps helped by his party’s stance on reversing the Brexit referendum. As Tom Oxley told us, 74% of students would like us to remain in the EU, so this policy is likely to be popular with the many young people who feel disillusioned by the lies and anger around Brexit which, though it will affect their futures more than any other age group, they have had no say in.

Christine Bayliss’ most salient answer (other than about anti-Semitism!) was about Broad Oak Primary School, my old primary, which is facing closure as it’s under-capacity. Despite not being MP, she has added her voice to the fight for it by writing a letter to the council, and she spoke about its importance on Friday, especially to children with special education needs.

Students were impressed with what they saw: 'Whilst the main political leaders of our country may be able to get away with avoiding scrutiny, it's valuable to know that young people are still given the opportunity to scrutinise local candidates and get, arguably, more truthful responses in a political climate full of such dishonesty,' said Bella Cue, Y13.

Throughout the year groups, the Hustings have shown that the school is full of politically-engaged people, and it is a shame that only a small minority of us can vote. To those who can, I urge them to use their vote. Politicians don’t expect young people to go to the polling booth, and if we all vote, we could overturn the policies which ignore us and show them that we matter.