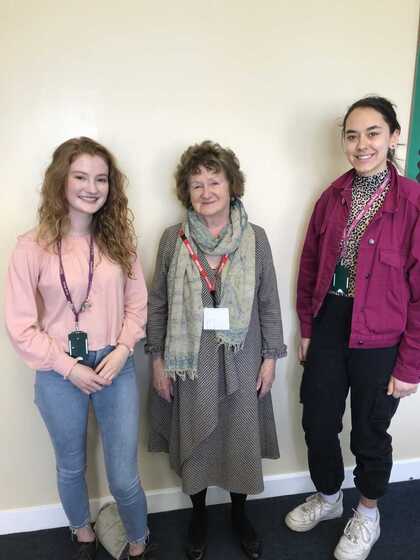 The treatment of women in politics in the 21st century is utterly ‘horrendous’ and could put young women off ever entering the political sphere, Labour peer Baroness Andrews told The Heathfield Vine in an exclusive interview when she visited the school at the beginning of May,

As a female member of the House of Lords, she possesses huge sympathy for the many female politicians being persecuted around her. She spoke of the brutal murder of Jo Cox, a very extreme example of maltreatment of women in politics, as well as the more recent misogynist abuse received by Jess Phillips, Anna Soubry, Heidi Allen and Karen Burke just to name a few.

‘What’s happening to them is dreadful - and the risks to their home, on their family life-the effects on their children. Some of them aren’t able to go on public transport anymore or have to receive police protection,’ said Baroness Andrews.

The Labour peer was in school to speak to History, Politics and Economics students, to inform them about her duties and responsibilities in The House of Lords as well as the parliamentary role of the House itself, but found time to talk to The Vine about the role of women in politics as a burning modern issue.

‘When you get into politics now you put everything at risk,’ she explained. ‘The whole level of discourse is so vicious and polarized now’.

A prime, and widely viewed example she gave of the dominance men can so easily impose over women, and get away with, is the way Donald Trump, known for his misogynistic character, hovered behind Hilary Clinton at public debates in America.

It is a real concern to Baroness Andrews how many young women may now be deterred from entering politics, for fear of the abuse so many political figures receive simply for the fact they are female. This is particularly the case on social media, which Baroness Andrews says she avoids because she is a ‘coward’.

Abuse of female politicians is something that the Baroness has personal experience of - indeed she chose not to stand for the House Of Commons having seen the level of vitriol politicians could face. She told us how her mother, who accompanied her to a constituency meeting in the 1980s, when she was considering running for office, afterwards was shocked at what she had seen, asking her daughter ‘Are you serious? Would you really want to go through that week after week?’

Baroness Andrews believes we still have a long way to go before we reach equality in politics. ‘How do we regulate it better? How can we protect people from that abuse?’ she asked.

On the positive side, she believes that the #MeToo movement is also affecting the political sphere. ‘MeToo has produced a sort of female assertiveness that is legitimized now. You can speak out now and be believed and listened to. There is a solidarity about women’s experience. Things are changing.’

But she finished on a note of caution: ‘We still don’t have loud enough voices. Even with very powerful, confident women, you still find them in rooms where they are fuming inside and not able to break into the conversation. That has to change.’