Endangered animals: saving the species on our doorstep 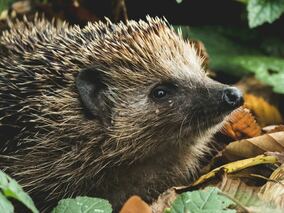 Turtle dove:
This beautiful, majestic bird is classified as very endangered in the UK. The turtle dove, known by many from the song ‘Twelve Days of Christmas’, is distinguishable by its speckled plumage and bright red feet. The birds are currently found in scattered places in southern and eastern England, where farmers are working for the RSPB to create feeding habitats.

Hedgehog:
The hedgehog’s population has been steadily declining in recent years. It can be found in Britain’s countryside forests, and in the gardens of locals. This mammal’s endangerment is likely to be blamed on human construction (such as roads and buildings), as well as because of warmer winters, which affect their hibernation patterns and ways of life. This causes the hedgehog to hibernate at the incorrect time.

Natterjack toad:
This amphibian is endangered in part as a result of cattle drinking from fresh water pools. the cattle contaminate the water, resulting in the death of toads inhabiting the pools. The toads are also at risk from threats posed by day-to-day human activity: people  unintentionally kill them by stepping on them, or driving over them.

Wart-biter cricket:
The wart-biter cricket is found in grassy areas - mostly in the UK’s open fields and grasslands. They tend to camouflage into the grass, protecting themselves from predators, such as birds, that are looking for a tasty snack. The crickets are declining rapidly, and are doing so again due to loss of habitat on heathland and chalk landscape.

Red squirrel:
These beautiful, russet-furred mammals are well-known for their declining population. The mammal is threatened by the presence of grey squirrels: grey squirrels compete for food resources and habitat, and hugely outnumber reds. There are thought to be only around 15,000 red squirrels remaining in the UK, compared to 2.5 million grey squirrels. The red is unlikely to survive if this competition from their rivals becomes any more severe.