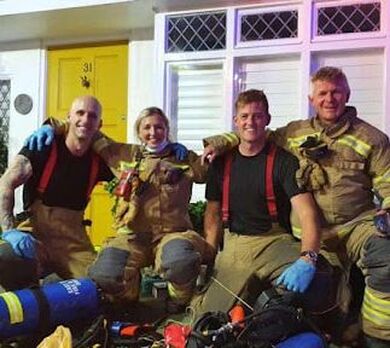 Bethany Cassé investigates the reality of firefighting and equality in the Fire Service.

Have you ever wondered what it is like to be a firefighter? Perhaps you simply imagine that it means putting out house fires and driving a fire engine, but in reality there is far more to the job than this. I met with Den Henry (pictured second from the left) a firefighter and the crew manager at Burwash fire station to discuss her experiences, the reality of the role and diversity within the service.

On a cold Wednesday evening in January, the sky already darkening at around four, I visited Burwash fire station to meet with Den, still in her uniform, getting ready to lock up the station for the day. Inside the building, everything seemed strangely quiet, not bustling with crew members rushing about as I had expected. There was an almost calm and welcoming feel to everything as we went upstairs into a large combined kitchen and gym room. Armed with plenty of biscuits, we began.

Den joined East Sussex Fire and Rescue service in 2010. Currently she works as a crew manager at Burwash, her retained station. She also works wholetime shifts at Hastings Fire Station. So what does her job actually entail? Putting out fires isn’t the only thing in Den’s job description - “Most people think that we just go and put fires out which, obviously, we do, but there’s a lot more to it.” On a practical side, typical call outs might include: traffic collisions, people stuck in lifts, floodings and even animal rescues - “anything really that might need a rescue”. Then Den tells me that there is also a lot of preventative work where firefighters will “go out into the community to teach fire prevention and give home safety visits to people”, which isn’t necessarily what people expect when they sign up to the service. As the crew manager for Burwash Station, Den now has a lot of extra responsibilities like, for example, being in charge of making important decisions at an incident and overseeing the safety and welfare of the crew.

In the past, the Fire Service has had a very male dominated image with the term ‘firemen’ being used interchangeably with ‘firefighters’ - a damaging stereotype which has the potential to alienate and dissuade future generations of women and girls from entering into the profession. I was keen to learn more from Den about her own experiences of being a female firefighter. She tells me that she was the first woman to join the crew at Burwash but, since then, she has encouraged and promoted the job to other women so that now there are four women in the Burwash crew. She reflects that “Especially within a community where people know each other, they look and think if she can do it, I think I can too.” Despite the active efforts of the Fire Service to try and encourage the development of a more diverse workforce, Den comments that, “At the moment, operationally in the fire service, women still [only represent] 5% which is very low in this day and age. I think historically a lot of jobs are stereotyped and it’s just teaching children that they can do whatever they want to do.”

By nature, firefighting and attending incidents can be high adrenaline and emotionally demanding. Den concedes that even now “When the alerter does go off…your heart goes pumping and that doesn’t stop, you know, ten years, twelve years down the line. My heart still goes racing [everytime].” However, whilst working in the Fire Service can sometimes be hard work, Den is quick to point out that it is also an incredibly rewarding job. “I think my favourite part is the practical side of it and going to incidents where you’ve been able to save someone’s property or rescue them. You realise what a difference the Fire Service makes within the community and how important it is.”

Interestingly, East Sussex Fire and Rescue Service, at present, doesn’t ask for any qualifications as entry requirements, however, there is a rigorous training process and very stringent criteria to get in. There is a lot of training and assessment to gauge both the candidates’ physical fitness and situational awareness. Den explains that: “The physical isn’t just about your health and fitness, it is also about how you react to certain situations." They try to simulate what the job entails, for example, carrying equipment across long distances and being trapped in enclosed spaces with restricted breathing. “The training side of things is continuous; it doesn’t stop once you are part of the service, [it’s] quite relentless.”

After completing all of the required training, there are additional qualifications that you can complete. For example, doing an EFAD course (Emergency Fire Appliance Driving) in which you learn how to safely drive and operate a fire engine. Which, yes, does include driving at speed and going through red lights! Den, who has taken the qualification, adds with a smile that: “It is quite fun because everyone just stops and lets you go by.”

Biscuits now thoroughly demolished, Den locks the station up for the night. As we leave, I catch a glimpse of the red of the fire engine, poised and ready for action.

Learning more about the Fire Service and the crucial work that they do for the local community was incredibly fascinating and inspiring. If firefighting is something that interests you, one thing that you should take away from Den’s experience is that no matter who you are: you can do it.