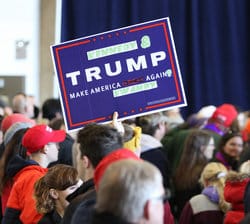 I’m not entirely sure where to begin.

You know those nights where you have a stream of several consecutive nightmares, none of them make sense and you wake up a bit confused and upset? This is what 2016 has been. A sequence of nonsensical events which amalgamated into an absolute car crash of a year. From the Great British Bake Off news which distressed the nation, to the detrimental political decisions made throughout the year, the only way I could possibly comprehend what happened during 2016 is by considering each month one by one. (Spoiler alert: I tried this, but in hindsight I’m still confused.)

January was already off to a shocking start. The entertainment industry suffered a huge blow when we saw the tragic deaths of David Bowie, Alan Rickman and Sir Terry Wogan just to name a few.

Heading towards February and the World Health Organisation declared the spread of the Zika Virus (an infection which can cause certain birth defects if the mother is affected). The global health emergency required an urgent response as cases were discovered in South America, Puerto Rico, the US and Europe. A devastating earthquake struck Taiwan killing 117 civilians. Towards the middle of the month, Harper Lee died and the literature scene lost an iconic novelist.

Then the primaries happened.

The American presidential race has been a reoccurring nightmare throughout the past year. The juvenile bickering between Trump and Clinton forced thousands of people into a spiralling pit of despair. The primaries filtered out Ted Cruz (aka the zodiac killer) and Bernie Sanders (aka the only shot America actually had at a decent presidential candidate). White supremacists in New Hampshire created a super potential action committee to support Trump’s campaign. The FBI opened up multiple investigations into the private email account of Clinton. Trump’s lawsuit list kept unfolding whilst Clinton roped in celebrities to enrich her campaign. The world turned to Joe Biden memes and photos of the Obamas in order to treasure the final moments of a beneficial, progressive White House. But I digress. I’ll come back to this.

February closed with an extra leap year day which no one really wanted because 2016 had already been exhaustingly relentless and, even by the second month, we’d already suffered enough.

June hit us hard. On a much more serious note, 49 people were killed and 53 wounded when Omar Mateen opened fire inside a gay nightclub in Orlando, Florida. An appalling event which highlighted not only the dangerous consequences of gun laws in America, but also the treatment and attitudes towards the LGBTQ+ community and other minority groups. Previous to this, The Voice singer Christina Grimmie was shot and killed at her concert in Orlando just days before. Muhammad Ali, renowned for his boxing and hugely influential in the development of the civil rights movement, passed away after a long battle with Parkinson’s disease. In Istanbul, armed gunman staged an attack at the international airport terminal killing 45 and injuring 230. In Britain, 51.9% of voters made the decision to leave the European Union. There is a lot of uncertainty surrounding this choice, the impact could be beneficial or detrimental to the future of Britain. As part of the future generation, I personally believe that we were stronger remaining in the EU. However, I’m not here to restart the debate. Whether you were leave or remain, the campaign divided the nation to such an extent that hostile attitudes are still prevalent now, even at the end of the year.

July, August and September saw the Bastille Day terrorist attacks – a 19 tonne cargo truck drove into the crowds celebrating the 14th of July in Nice, France, killing 86 people and injuring 434. Gene Wilder died, Brangelina shared the news of their divorce, Apple removed the headphone jack from their phones and the end of the beloved Great British Bake off was announced. Granted, the latter three items are more trivial but they still contribute to the disaster that has been 2016.

October, ah October. The month in which Vine ended and people began dressing up as killer clowns and chasing other civilians. You know a year has gone seriously wrong when delinquents hiding behind wigs and terrible face paint become the biggest threat to society. Not to worry though, the clown pandemic died down when one of them became president elect in November.

Yes, in November Donald Trump (a racist, misogynistic, homophobic, transphobic, sexist, anti-Semitic heinous animal) won the majority of electoral college votes making him the president elect. A man who’s been bankrupt more times than he can probably count, is going on trial for raping a 13-year-old, wants to build a wall to block out Mexico, has repeatedly said that he would date his own daughter, and describes himself as a sexual predator who grabs women by the *****. It’s perplexing how such a disgusting creature has climbed to his position of power right? Then Leonard Cohen died and Toblerone bars were reduced in size and I gave up on 2016 altogether.

So that’s been a break down of the year, I told you you’d still be confused.
At least 2017 can only get better from here? Let’s hope so.