Looking back over almost a century 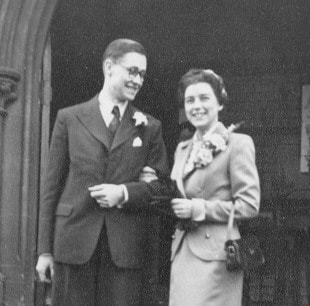 Gemma Cullington finds out more about the incredible life of her grandmother - from a childhood in Nazi Germany to starting a family in 1960s' England.

“Our youth was so different. It was hampered by circumstances, and by old-fashioned ideas.” - Meet my grandmother, a remarkable woman with over 90 years of anecdotal tales to tell.

On a sunny yet deceptively bitter Friday afternoon in January, I stand outside a moderately-sized house in Tunbridge Wells. It's a quiet area, away from the main road, and birds are chirping happily in the gently swaying trees overhead. Heading closer to the house, I am met by a cadmium yellow door with two doorbells sitting beside it. Choosing one and hoping for the best, a ringing is heard from inside. Moments later, Käthe Anna Dorothea Cullington (née Krohn), my grandmother, emerges, smiling widely. “Which bell did you ring?” she asks, and I tell her. “Yes, that's the right one. The other one doesn't... well, it doesn't do much,” she laughs. “Anyway, come in, come in!” The homely warmth that the house provides serves as an immensely welcome relief from the crisp weather outside.

There's a shelf of delicate little ornaments and an ornate rug rolled down the hallway, leading to the living room. “There's not much time to talk about ninety years of life,” she jokes, following the patterns on the floor to the living room and taking a seat on a dark pink sofa which is filled to the brim with cushions, pillows, furs and blankets for comfort. One cushion reads, 'I'm Not Bossy, I Just Have Better Ideas!' which is placed proudly beside her like a trophy. Her walking stick sits to the other side of her, leaning against the arm of the couch; her feet are warm in grey, fluffy slippers, and she has purple fingerless gloves which perfectly match the lilac of her fleece. At first glance, she seems to be an average grandmother, but she has lived through so much and made it to the other side with experiences which may never be fully understood by anyone but her.

The combination of traditional wallpaper and old furniture makes it feel like stepping into the past, at which she explains that “this is where I've lived since 1968”, though the more contemporary additions - such as a television and family photographs - serve as reminders of the modernity of today as she begins the trip down a ninety four-year-long memory lane. So where did it all begin? “I was born in Hamburg on the 22nd of September, 1927, when my parents still lived with my grandmother, in a very old house,” she says, “But because my dad was war wounded, they got a flat allocated. That was where I spent my first three years.” But that wasn't the last move she had during her childhood. “I had...what was it? About four moves in Hamburg, and my first school was in Hamburg.”

And what was school like? Do you remember having a favourite subject? “When I was little, I remember columns of figures, and we had to add them and do division. Oh, I loved it! I was writing it down so quick.” She begins to reminisce, considering how things might have been different had she lived in a more modern time. “I would have studied Mathematics if I was a later generation like yours. Yes, I would have done. I loved it! I loved Maths, you know?” Putting on a comical voice, she adds, “But 'oh, it wasn't a girl's subject, you couldn't do that.'” She pauses with a chuckle, and although it seems laughable to look back on, it can't have been easy at the time. So if she could have taken any career path, it would have been related to maths? “Oh, yes, I would have loved to be an engineer, but no, girls went into nursing, and did teaching, and not engineering, but there you are.”

Although discussing her favourite subject makes it seem as though her life was perhaps fairly ordinary, the war most certainly tainted her childhood, as she was still a very young child when Hitler came into power, in 1933. “Very important, that was,” she tells me, “We all had to stand around and... and greet him.” She sighs, evidently picturing herself experiencing it once again. “Completely daft, because it was January; it was very cold.” This leads on to a discussion about her parents. “And my dad said 'this man will make a war, and the next war will be from the air' because he had war experience.” So what did he do? “He was building a house in the country. It took some time before it was ready, but then we moved to Ahrensburg.” She goes on to say that she spent “a few quite happy years there,” but with this, her smile fades. “Then of course, Hitler did make war, as you know, in 1939.”

Does she remember where she was when she first heard about the war? After a small pause, she responds, “Yes. I was... in the kitchen.” This mundane answer serves as a shock to me. It's hard to consider how it must have felt, to be going about her daily life, just twelve years old, and suddenly hearing about the reality of Hitler and war. “People were all sitting around a little sort of radio and hearing that there was this war.” She pauses again, hands clasped on her lap, “In the evening, I was standing in our hall, and we were told that if the bombers came to bomb us, the children would go outside with saucepan lids and hit them together and tell all the people to go to safety, because we all had cellars and basements, you know?” Despite this, she goes on to describe how the war was not a prevalent part in her life for a short while: “Until 1940, I commuted by train to Hamburg, to what they called a middle school.” Leaning in, she says, “Then Hamburg was bombed. First of all, the bombs weren't too bad, but they still evacuated children, and I went for the first time to Bavaria to Bayreuth.” This didn't last particularly long, however: “There was a lull in the war because Hitler was very successful and so we came back to Hamburg.”

My grandmother was an excellent student and was consequently shifted to what she called “a higher school”; it was a Klosterschule, or Convent School, run by the Catholic church. Following a “big, big, big, big air raid in 1943,” which lasted three days and practically flattened Hamburg, their school was one of the only buildings remaining – it was needed for accommodation, and the students would have to leave. “The whole school, lock stock and barrel, went to Münchshöfen in Bavaria, and there I spent the rest of the war, plus a bit more, because there was no transport home.” Leading on from this, she adds, “I never saw my parents or anything during the meantime - they couldn't travel; I couldn't travel.” And what was that like? “It was a...” she sighs thoughtfully, “Well, a quite happy time. It was like a boarding school, you know? It was a good sort of, almost three years. Then,” a wistful pause is added for emphasis, “I grew up. By that time, at the end of the war, I was 18.”

What was it like trying to return to normality after the war? “Well, I wanted to go to university but, because the end of the war shifted a lot of young soldiers back into Germany, they had a preference to go first. They got all the places! I didn't!” So what did you do instead? “I went to a college teaching English and Spanish, then I got quite a good job as a secretary in a firm, and then I wanted to perfect my English." She explains, "I wanted to speak English - as it was spoken by English people - and there was a sort of youth club run by the Methodist church in Hamburg for young people to get together, German and English, and have discussions.”

This is where she met my grandfather, Ronald Cullington, a young English soldier at the time. They became close during his time in Germany, but once he returned to England, he became “very, very ill” with pleurisy. With a knowing smile, Käthe explains, “In his feverish dreams he kept on talking about me, so his parents thought 'oh well, we'll invite her, just to get it off his chest'”. She spent one summer holiday with them, then the next year, 1952, they got engaged. “In 1953, we married, although I didn't have a proper wedding,” she clarifies somewhat hesitantly, “I didn't have a white dress, and my parents didn't come, because you still had to have had Visas, and it was really rather iffy in the early 50s to come to England.” But once they were married, Käthe and Ronald Cullington lived in Crayford in an old ruin of a Victorian terrace house. They worked hard – she as a translator, he as a chartered surveyor – to buy a house in Cold Blow Crescent, Bexley. “It was a three-bedroom house, but the third bedroom was no more than a cupboard.” Both her children, Jennifer and Andrew, were born while they lived in this house, in 1962 and 1967 respectively. With two children, they realised it was time to move again. “When Jennifer was born, her cot just fitted in there, so we decided, well, that wasn't good enough, and decided to buy this house.” At this, she indicates her surroundings with a proud expression on her face.

She looks back on the early years of motherhood. “I wasn't a natural mother,” she admits with admirable sincerity. “Honestly, it frightened me. There was suddenly this little bit of... something... screaming at me all the time.” She had no experience with children, as her mother, Minna, had spent her own childhood surrounded by – and looking after – many younger siblings, and did not wish the same fate upon her daughter. She had kept her away from her brothers (of whom even the closest in age, Peter, was 8 years younger) when they were small. It was a decision made out of love, but it didn't make Käthe's mothering experience a simple one. She didn't know what to do at first. “I was horrified! I wanted Jennifer, but when she was there? Oh dear, oh dear, oh dear.” She shakes her head, though an amused smile is placed on her lips as if she can't believe it ever happened. More positively, she adds, “But we managed. They grew up.” With one child a doctor and the other an electrical engineer, she looks pleased, and rightfully so.

Before beginning, she warned me that she had lived a “humdrum, boring life,” but, after hearing her story in her own words, I beg to differ. It has been so incredibly interesting that time has passed quicker than either of us realise, and the sun has set since we began. She gazes out of the window now at the blackening sky, where stars are just starting to emerge, sighing with bittersweet satisfaction: “Well, what more can I say? That's it. My life.” And what a life it's been.