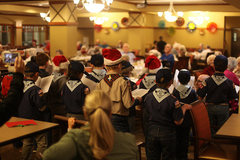 Girls have been Scouting for over 40 years. Sections of the Scouting movement became co-educational in 2007 which means that all young people are given the opportunity to scout together and to understand and empathise with both girls and boys.

Views are polarised on whether girls should be able to go to the originally male group, Scouts, rather than the female version of Brownies and Guides. This is particularly the case as boys - unless they identify as girls - cannot join Guides. Arguably there is a greater need for safe spaces for girls than for boys because of the inequality that still exists in society. However, you may still question whether this is a fair situation. The fact boys aren’t allowed into Guides may even reflect a continuing attitude that girls’ clubs are inferior to boys’ - the assumption seems to be that no boy would want to join Guides, so there is no need to change the rules.

Today, girls and women account for over 25% of the total membership of Scouting and it is the largest mixed youth organisation in the UK. The Scouting movement believes in gender equality, and the best way to promote it is to have sections that are mixed, open to both girls and boys at all levels. Some believe that boys miss out as a result - but this is wrong, as it has been proved that boys perform better in a mixed setting - so you see boys, having us girls around is better for your development.

But is not all rosy for girls. Although they have access to the movement and there are a lot of Scout leaders who are female, not a lot of managers are female. Perhaps this is just another example of the bigger picture on gender equality. That said, Scouting is doing all it can to encourage women to take a role at all levels, with some pretty high-profile role model ambassadors - including the Duchess of Cambridge!

Create your own unique website with customizable templates.
Photo used under Creative Commons from aaron_anderer
UA-121891675-1