Memories of a modern tragedy: 9/11 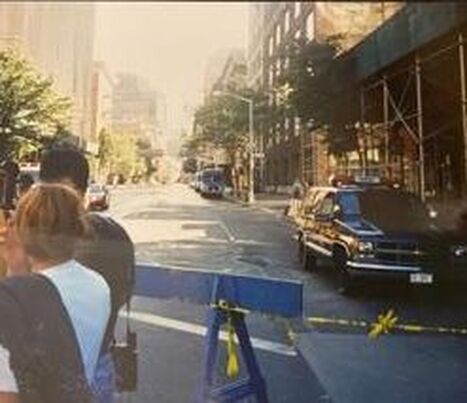 Isabelle Chappell gives an account of her mum’s experiences of the New York attacks.

When my mum, Hannah Chappell, was nineteen, she went to New York to work as a camp counsellor at a Girl Guiding summer camp. Unbeknownst to her, she would be witness to the aftermath of one of the most tragic and significant events in recent American history, the 9/11 attacks. I interviewed her to find more about her memories of that time.

On a Tuesday morning in New York, Hannah Chappell was on a minibus with an American tour guide, bus driver and nine other teenagers from all over the world. They were a few hours from New York City and about halfway between the Pentagon and the Twin Towers.They first heard news of the attack on the radio whilst they were still travelling, when the first plane hit at 8:46am. It was at this time when the hijackers hit the first twin tower at floors 93-99. Hannah still remembers how scared she was when she heard of the attack and said how tense the minibus became. She said the tour guide tried to calm everyone down and that he told them that they just needed to get back to their hotel.  It was then at 9:03 that they then heard about another attack which hit the floors 75-85. They didn't see any actual footage until the turned on the television at their hotel and saw the wreckage. After the second attack, Hannah was terrified and felt like a war might break out because of how angry the Americans were. "When I heard the casualties were over two thousand my heart dropped and I felt so helpless as I couldn’t do anything," she explains. Hannah says that she can remember how many missing person posters there were around New York and how sad this made her feel for all the people that were in pain because of the loss of their loved ones.

Hannah went out that day and saw the devastation first-hand; she explained how completely wrecked and altogether changed New York looked. Everything was blocked off by the police and she recalls all of the worried people in the surrounding areas. "The most difficult thing was that I was unable to contact my family to let them know that I was safe," she remembers. Almost a day went by before she was able to contact home because all of the phone lines were down. Hannah remembers feeling incredibly scared, all alone in a foreign country when she was only nineteen years old; all she wanted was to get home but no flights were available for over a week. She had to share a hotel room with six other people and kept desperately calling the airport to try and get the first flight home.

All my mum could think about was how lucky she was because, only a few days before the attack, she had visited Twin Towers. She said that they were beautiful and no-one could ever have imagined what would happen just a few days later. She said she still can’t comprehend how many people lost their lives and that this memory will always stick with her. Hannah recalls that she attended a gathering that took place to show her respects. At this point all she wanted to do was to go home back to England. "New York felt like a very scary place and I didn’t feel safe," she explains. She vividly remembers the smoke and heat pouring out of the subways.

Hannah says that the most heartbreaking thing that she saw was a smashed up school bus that would have had many children in it that was left on the side of the road. She recalls the frenzied rush that there was since there weren’t enough firefighters to help the volumes of people that were stuck up in the Twin Towers and she remembers trying to comfort a woman in the crowds whose son was working in the building.

The struggle to get home was hard, as many people wanted to get back to their loved ones and there weren’t enough planes to withstand the volume of demand once the planes were back up and running. It took two whole weeks for her to finally be able to get on a plane back to England. She remembers how it was the greatest relief to step off the plane, and she began to run just so that she could get home quicker.

This experience will always be with her and it makes her think sometimes of how incredibly lucky she was to come out of it alive. 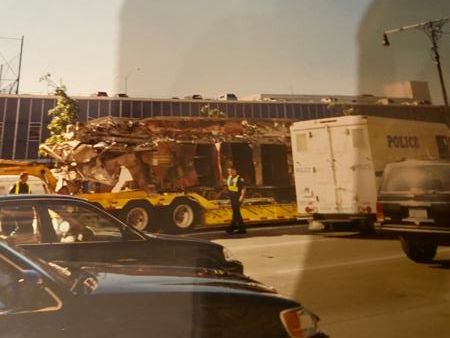