If I'd known you were coming... 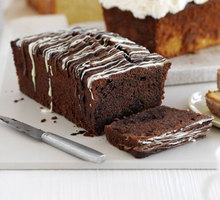 Chocolate; something that almost everyone I know loves.
Cake; again, something everyone I know loves. When the two are combined…  it’s a feast!
Chocolate cake is one of my favourite things and probably quite a lot of other people would say the same. I have made many chocolate cakes and also searched for many as well, but this one seemed to stand out and my brain, plus my stomach, ordered me to make it!
Many people I know either don’t have the time to cook or think that it is going to be so complicated that all the ingredients are going to be all over the kitchen walls! This is not the case, because if you find the right recipe it will be as simple as brushing your teeth or as easy as  walking up the stairs. People disregard cooking and baking before giving it a chance  which is why so many young people don’t know what to do in a kitchen.

People like Jamie Oliver have been trying to get kids cooking but more needs to be done. People need to realise that children growing up need to learn how
to cook so they don’t depend on ready meals.
I love making cakes because of the simplicity of the whole thing. This recipe was really simple to follow and the cake itself  turned out really
well. I was told that the cake looked good and it was also really moist which helped with the texture. It was a rich cake which means that it could
easily be served with cream or ice cream but could also be served with a humble cup of tea! The cake itself could, with no trouble, serve ten
people.  Plus, if you only had a little amount of time, you wouldn’t have to drizzle the chocolate on the top.

I was surprised to see ground almonds in the recipe because I wasn’t sure whether or not the taste would be ruined by it or you would be able to taste the almonds too much. I researched online to see what the almonds were used for and found out that the almonds were more for texture than for taste. I thought it was a good idea because it did make the texture better!

The only criticism I have with this recipe is that it took about seventy minutes to cook instead of the intended forty-five to fifty minutes. It didn’t change the way
it tasted but it was a bit annoying to find out I had to wait for the  amazing cake that was sitting in the oven!

The BBC Good Food  website is an excellent place to find easy and quick recipes for all occasions and they have an enormous number of other cake recipes that I am  dying to try. I would praise the BBC for their website, www.bbcgoodfood.com, I would tell anyone to have a look at the website and try one of the recipes as they are so simple to  follow.

Method
Heat oven to 160C/140C fan/gas 3.
Grease and line a 2lb/900g loaf tin with a long strip of baking parchment.
To make the loaf cake batter, beat the butter and sugar with an electric whisk until light and fluffy. Beat in the eggs, flour, almonds, baking powder, milk and cocoa until smooth. Stir in the chocolate chips, and then scrape into the tin.

Bake for 45-50 minutes until golden, raised and a skewer poked in the centre comes out clean.
Cool in the tin, and then lift out onto a wire rack over some kitchen paper.
Melt the extra chocolate chunks separately in pans over barely simmering water, or in bowls in the microwave, and then use a spoon to drizzle each in turn over the cake.

Leave to set before slicing.

Overall, I think that this recipe was very good in terms of taste, texture and appearance; however, this recipe did take a lot of  time so you would have to spend a whole morning on this project. I think that anyone who wants to start cooking or baking should start with a simple cake and then move onto the more technical things. I would recommend this recipe for anyone who loves chocolate and has a large amount of time to spend on it!
Article by Emma Carter
Y9
Powered by