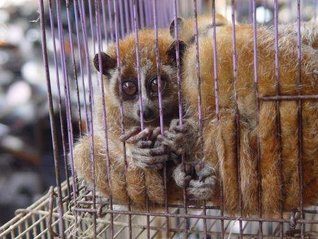 Most of us would fancy owning a unique and exotic pet, yet this practice of taking interesting animals from their environment causes devastation on a global scale.

A harrowing and rapidly expanding chain of widespread organised crime is decimating the earth’s most precious species- including tigers, elephants, and rhinos on an outrageously increasing level.
This is a crisis that is being ignored.

Animals are ripped from their habitat and thrust into the hands of uneducated consumers who enable crime groups to cause havoc to entire ecosystems- whilst money is poured into their pockets. Those involved in this trade are able to gain immense profit without risk from authorities or governments.
Many wildlife traders declare their species are captive bred, thus giving the false impression that there is no negative impact on the environment. These traders believe in the erroneous concept that we can treat animals as products without any regard for their wellbeing. People whose motives are driven by financial gain. People who think wildlife is ours for the taking.

Indonesia provides sanctuary for over 1,600 species of birds yet it’s also populated by a myriad of species at risk from the pet trade. The severity of this conservation epidemic is catastrophic, leaving 28 species of birds on the brink of extinction in Indonesia alone. Even with their impending threat of extinction their commercial value only sky-rockets because of the rarity of the species, furthering the environmental damage.

It’s been terrifying witnessing the expanding appeal to own one of these “unique” pets in recent years. A video surfaced online receiving over 6 million views which depicts a seemingly cute slow loris raising its arms in delight whilst it is tickled. To the mass majority of these viewers what’s being seen is “cute” and the animal is “happy” yet this is far from the truth. The slow loris is raising its arms as a defence mechanism to reach the venomous glands in its elbows, if it still had teeth it would bite. Thousands of slow lorises are torn from their homes in the wild, often whole families at a time, to be sold illegally in animal markets or on the streets. Before they are sold their teeth are cut with pliers or wire cutters with no anaesthetic, in order to protect their owners from their poisonous bite. The procedure causes the animals agony and often results in infection or death. Transported in cramped, dark and poorly ventilated containers; it’s difficult to comprehend the suffering they endure. Inside the claustrophobic boxes, between 30% and 90% of the slow lorises die before they reach their destination. This is a needless and unacceptable form of torture.

You may think that the places where such atrocities ensue are far away from us and nothing like this could ever occur so close to home. Even large pet stores and chains here in the UK treat animals as products even if these practices aren’t strictly illegal.
What can you do? If you are buying a pet make sure you buy from either a shelter or a trust worthy business that is guaranteed to treat their animals with the correct welfare. Ask questions about where they source their animals particularly if you are looking to buy an exotic animal- make sure you know whether they came from the wild or if they were born into captivity. Although it may seem beyond us, the ability to stop the illegal pet trade is well within our reach. If the world does its part, we could stabilize the shrinking animal populations or even reverse their decline. The future really is in our hands.