Call of Duty: World War II​: should the nation be up in arms? 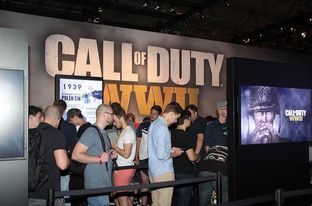 Call of Duty: World War II was released on 3 November. Like the other games in the series, to purchase it, the buyer must be over 18 years old. Meanwhile, children of 16 are able to sign themselves up for the military, where real guns are used, real blood is spilt and real deaths occur on a regular basis. As a country we are worried that by experiencing violence through video games and television we are encouraging our young people to become aggressive and dangerous. Yet this is also a country which allows, and trains, teenagers to participate in exactly what they are shielded from seeing.

Furthermore, while an adult in their early 20s can experience the entire content of Call of Duty in six hours, with the option to stop at any time he or she wishes, a young person in their teenage years must serve at least until their 22nd birthday (as a minimum). It is, therefore, possible for a boy or girl to be forced to serve in the military for six years – over a third of their age when they enlist. If a gamer decides that a world of war and weaponry is not for them, they are able to set aside the controller and live without the invasion of violence. However, if a young person of 17, a year in, regrets the decision he or she has made, they must endure a life of horror for at least another five.

During an interview with Critical Hit Gaming, Sledgehammer Games co-founder, Michael Condrey explains how they “have been on an extensive research” which co-founder, Glen Schofield says meant they could deliver “an epic and gritty experience” which captures the “vulnerability of the individual soldier”. It is clear that they have attempted to portray what it was to serve in the army and the horrific history of 70 years ago. However, despite the research and technology that went into the design and production, is it really possible to emulate the damage, both psychological and physical, that is caused by warfare?
It is arguable that the age rating for Call of Duty is so high to discourage young people from enlisting. It would be no wonder that Call of Duty players would want to sign up for the experience when the game provides such an unrealistic experience of war - in which a single life can respawn as many times as necessary, it takes multiple bullets to die and, no matter how long it takes, the player is always heroic by the end of it. In this way, it is good that the game producers do everything in their power to prevent these inaccurate ideas from plaguing the minds of those who have their whole life to live.

Call of Duty: World War II promises the most realistic experience yet and credits new technology and extensive research into the history of the world’s biggest war to achieve this. For instance, the graphics of the game have been highly commended, as has the backstory and detail of the main protagonist. This realism makes the content all the more disturbing, proving that it emulates the tragedy of war far more accurately than previous attempts. It is open to speculation whether this makes it more deserving of the ‘18’ printed on the cover; however, it is baffling to think that at 16 one is allowed to experience the reality of a scenario which you are not even allowed to play at 17.

Create your own unique website with customizable templates.
Photo used under Creative Commons from avatar-1
UA-121891675-1