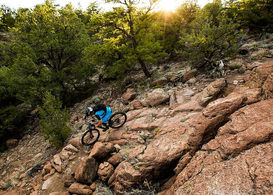 ‘Can he make it?
‘World championship number three! He’s the first rider in a long, long time to make any sense of Martin Maes’ time.’ – Rob Warner, Lenzerheide 2018.

While some may be exhilarated by the thought of supporting their football team or watching the tennis opens, something far more adrenaline-filled takes my fancy.

Nothing is as tense as watching the downhill world cups. With Loic Bruni taking his third World Champs in Lenzerheide and Amaury Pierron tearing up the overall World Cup, it’s a fine testament to the sport. However, it may be that few are familiar with these competitions, with notable names sure to fly over their head. Personally, I don’t feel that enough light gets cast on mountain biking as a sport. Bar the few who actively search for this excitement on places such as Red Bull TV, very little is shown. Perhaps it’s because few have an interest - or perhaps they don’t even know it exists.

The world of racing in mountain biking comes in many different categories: cross-country, downhill, enduro, free-ride and slopestyle are just a few. However, each type is very different. For example, an enduro race consists of multiple stages down different tracks; from each stage, a time is made, from which their final time is worked out to establish their final position. In cross country races, on the other hand, racers ride several kilometres across different terrain. Meanwhile, slopestyle is very different, with riders competing to receive the highest points by performing tricks with variations of different jumps.

Personally, though, my favourite category is downhill. Watching the most hardcore riders shredding through the most steep and rugged routes makes each ripping ride excruciating as you watch riders go one after another. They might lose out by a split second or they might even beat the leader’s time. Either way, anxious terror courses through any man or woman who sits on centre seat as they watch someone racing down and hope to stay clinging onto the podium finish. Watching the reactions of your favourite downhill rider, such as Brendon Fairclough or Aaron Gwinn, can be either heartbreaking or heart-warming as you see their heads bow in disappointment or their eyes light up in pride and astonishment. But of course, as an extreme sport, not everyone reaches the bottom: just the smallest mistake can lead to a frightful crash that could even put a rider out for a whole season. Broken bones. Broken bikes. Either way, when something goes wrong, it truly goes wrong.
While a lot of these names are men, in recent years there have been plenty of women rising to the top with some of the world’s best mountain bikers being women. What’s more, two of the world’s most famous women’s downhill champs, Rachel Atherton and Tahnée Seagrave, are from the UK!

So, whether you’re already fixated with the world of mountain biking or not, I would strongly suggest going on YouTube, or looking up Red Bull TV, and watching some quality mountain bike videos. Who knows - you may even get so hooked with the exhilaration of the sport that you decide to try some of this action for yourself!

Create your own unique website with customizable templates.
Photo used under Creative Commons from mypubliclands
UA-121891675-1