Why is lesbianism still a cultural taboo? 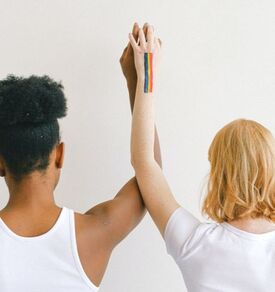 Lesbian - a dirty word? No, the word lesbian is not inherently a dirty word. So, why is it said as an insult or whispered like it’s taboo? Did this word always carry so much stigma?

First, it is essential to understand its meaning; the literal definition of the word ‘lesbian’ means a resident of the Isle of Lesbos. However, during the late 19th century, the term was coined for women loving women. The word in relation to sexuality was derived from arguably Lesbos’ most notable member, the Greek poet Sappho, who wrote literature featuring romantic and sexual relationships with other women.

Despite the harmless etymology, the word lesbian has become almost interchangeable with a porn category. This extreme sexualisation has spilt over into other areas of media, such as films like ‘Lesbian Vampire Killers’ (2009) which presents lesbians as nothing more than bloodthirsty sexual objects. The film, along with a plethora of others, centre their lesbian characters as highly feminine, over-sexualised and one-dimensional playthings for men. Unfortunately, it's all too common for lesbians in TV shows and films to have been written by men for the sexual gratification of their male viewers. ​Contrarily, these hyper-sexualised lesbians are juxtaposed with the stereotype of loud, angry, man-hating lesbians. This stereotype is often used to scapegoat women who express political views that don't align with the ideas of misogynistic men, portraying them as aggressive and unapproachable.

These damaging examples of lesbianism in media and real life cause lesbians to feel a disconnect from their identity, not wanting to claim the misused word as their own. However, society is gradually moving forward and today we can see a positive representation of lesbians in media, including ‘The Haunting of Bly Manor’, ‘She-Ra and the Princesses of Power’ and ‘The Jasmine Throne’.

Lesbians and all members of the LGBTQ+ community deserve inclusive representation and the freedom to celebrate their identities without fear or adversity. So, no, the word lesbian is not dirty, it’s not an insult and it’s not taboo - it is a sexuality: one that should be worn with pride.