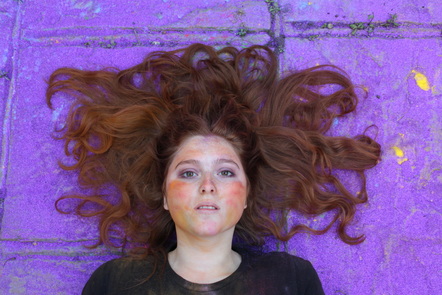 ​She walked down the school corridor, head down. She saw her reflection in a noticeboard, and saw what was wrong; what was different. She heard the muttered comments - she heard the jeering laugh. Someone called her attention, to mock, for the jubilation of eliciting a response. A cruel name was thrown out, because that was what defined her. That was her identity.

At first, he stayed standing. He backed away, tears stinging his eyes, the gravel rough on his bare feet. They’d taken his shoes. A red heat crept up his neck, flaming his cheeks. One of them spat at him, and it landed on his foot. There was a sharp kick in the back of his legs, and he fell. They howled with laughter.

While these things may have happened at school, other things happen elsewhere.
It happened in the street. And in a food tent; in an American diner. Women told me my hair was beautiful. It seems strange, to me, that something so carelessly ridiculed can be envied. I’ve been lucky, in the sense that I’ve never been badly bullied for being a redhead, but I know those that have.
You may never have noticed. You may have noticed but never given it a second thought. What you might not have realised is that children with red hair are routinely bullied for something that makes them different; makes them stand out.

‘Ging-er’ (rhymes with singer) or worse - ‘Ranga’ (short for the orange-haired orang-utan). It’s an easy trait to pick on, because it’s different: if someone wants to come along and find something wrong - the crack, the missing piece, the mistake - they see it. While art and fashion may desire red hair, in most playgrounds in England it somehow remains at the same time a disgraceful embarrassment; and, apparently, an acceptable form of insult. Presumably in Scotland or Wales, where red hair has a strong Celtic heritage and is present in greater numbers, this is not the case.

It seems to me that this is perhaps the last acceptable prejudice. Hair, perhaps because you can't feel it, isn't seen as a part of people - the joke isn't seen as personal. Haven’t we got a sense of humour? And yet it's still a part of your appearance; it's still fundamentally a part of your identity. Possibly more so for redheads. And it's not easy to change, or hide. (Red hair is harder to dye than other shades, because it holds its pigment more strongly.)
Interestingly enough, this isn’t a new prejudice. It’s one that goes back centuries – as far even as Ancient Greece. Redheads have been picked on and laughed at in society and in popular culture – along with other minority groups – for thousands of years. But surely we know better now?
It may not be skin colour, gender or sexuality, but mockery is a powerful weapon and no one deserves to be attacked for how they look, whether that’s down to size, shape or hair colour.