Children in Need returns for 2017 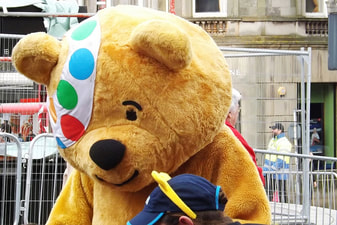 November 17 was Children in Need, also known as ‘Pudsey Day’. Students wore spots and brought in a pound coin; there were also cakes, a hunt and live music in the hall. Heathfield raised an eye-watering £1500!

The televised appeal for Children in Need began in 1980 and featured Terry Wogan, Sue Lawley and Esther Rantzen. That year they raised £1 million. The first televised appeal began in 1955 and it was called the Children’s Hour Christmas Appeal, the stars of the show were a yellow sock puppet, Sooty Bear, and Harry Corbett was fronting it. The first ever charity broadcast with the BBC happened in 1927 and it was a five-minute radio broadcast on Christmas Day. It raised £1,143, which was split between four prominent children’s charities.

The total for BBC Children in Need 2017 is a record-breaking £50.1m. It featured a Blue Peter Strictly Come Dancing special, a Weakest Link celebrity special, a singing EastEnders cast, and a teaser of the Doctor Who Christmas edition. The show also featured music from Katie Melua, the cast of Countryfile, Rita Ora, The Vamps and Jason Derulo, while Joanna Lumley presented the Sir Terry Wogan Fundraiser of the Year award for the second year. Well done everyone.

Almost every school across the UK was involved! BBC Children in Need exists to change the lives of disadvantaged children and young people across the country. Their vision is that every child has a safe, happy and secure childhood and the chance to reach their potential.

Create your own unique website with customizable templates.
Photo used under Creative Commons from markyharky
UA-121891675-1