Smiles all round at Shakespeare's Globe 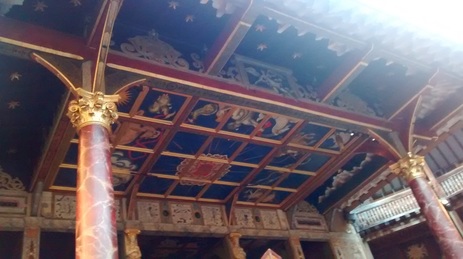 On the surprisingly sunny evening of the 10th of September English students from Year 11,  12 and 13 ventured out to Shakespeare’s Globe in London to watch ‘Much Ado About Nothing.’ The ‘Globe on Tour’ performed the Elizabethan comedy with both impeccable timing and wit. Despite standing for 3 hours in the pit Heathfield’s English students were not disappointed with cast of 8’s performance.

The main protagonists, Beatrice and Benedick (played by Emma Pallant and Christopher Harper) had a hilarious effect on the audience as their vibrant characters clashed in what initially appeared to be hate, since they both opposed the idea of love and marriage completely. However, as the play drew on their taunting and jokes (with the help of a few white lies being told by their friends) turned into real love for one another. Christopher Harper pulled off the role of Benedick brilliantly as his almost child-like over exaggerated facial expressions had the audience in fits of laughter. Meanwhile on the other side of the stage Emma Pallant played the equally childish Beatrice but unfortunately her curiosity did result in her being soaked by a bucket of water. Alex Mugnaioni played the villain Don Jon and Dogberry (the very eccentric leader of the village watch.) He brought great joy to the audience especially when he encouraged the audience to call him an ass.

Overall the performance was a success amongst our group. It was hilarious and witty but also brought moments of dramatic tension. Watching one of Shakespeare’s plays in Globe was a really memorable experience as the décor and atmosphere of the place was very different to a modern day theatre. It also proves how incredible Shakespeare was as a writer as his writing has been making people laugh for hundreds of years.