The history of Hallowe'en: haunting us to the present day 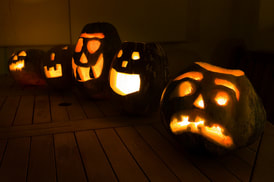 People celebrate Halloween in many different ways. Some go trick or treating, others have a family party or go to a Halloween disco. Some people don’t acknowledge Halloween at all if they are not interested or it doesn’t agree with their values and beliefs.

Halloween came about from the Celtic Festival of Samhain: traditionally people would light bonfires and scare off ghosts and evil spirits with costumes, as this was the day it was believed the ghosts returned to Earth. The day celebrated the end of summer and the harvest and the beginning of the winter, which often symbolised human death. The Celts believed that the presence of spirits helped Druids make predictions about the future. Around the bonfire the Druids would attempt to tell each others’ future.

In the 8th century Pope Gregory III created All Saints’ Day on 1 November. This day helped shape some of the traditions of Samhain. America reintroduced the idea of ‘trick or treating’ in the modern form during the 1920s. Halloween was previously named ‘All Hallows’ Eve’; it is now is more commonly known as Halloween, a holiday which has evolved into pumpkin-crafting dressing as witches and zombies.

How will you celebrate Halloween?

Create your own unique website with customizable templates.
Photo used under Creative Commons from siraf72
UA-121891675-1