Wishing you a very global Christmas! 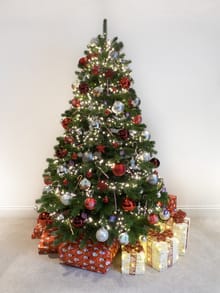 In Germany, there is an old tale about a poor family that couldn’t afford to decorate their Christmas tree. Then on Christmas eve night, spiders came down from the various cracks in the house and covered the tree with cobwebs. Then when sunlight hit them, they turned into streams of gold and silver (what we now call tinsel). Of course, like most fairy tales and myths, there are different ways of telling this story. It is now a popular tradition in Germany to decorate their Christmas trees with cobwebs and fake spiders.

Also in various parts of Europe such as Germany, the Netherlands and Austria-Hungary, they have a story of Krampus. Krampus is the “Christmas Demon” who would ride with Santa Claus every Christmas Eve. While Santa would reward the good children with presents, Krampus did terrible things to the bad ones. They are so brutal I feel I shouldn’t mention them. Let's just say getting coal in your stocking doesn't seem quite so bad anymore. Supposedly, he was tamed by a man called Zwarte Piet (Black Peter) who was Santa’s accomplice.

In Japan, Christmas Eve is sort of Japan’s equivalent of Valentine’s day. Couples will go for a walk to see the Christmas lights. Also fried chicken is a popular Christmas meal along with a spongecake with strawberries and whipped cream.

In India they use mango or banana trees for Christmas Trees. It’s also a common tradition for Christians to attend Midnight Mass. Families will join a parade of others and walk around town. Afterwards they all have a feast (as is traditional in perhaps all Christmases around the world).

In Mexico, children will often go around with candles, a board and clay figurines of the virgin Mary on a donkey with Joseph next to her. They go to houses and sing a song about Joseph and Mary and ask for a room in the house. The inhabitants will say no and ask them to leave, letting them move on to the next house. Eventually, someone will say yes and they are welcomed inside for a party.

And that is only a few of the interesting Christmas traditions from around the world! Why not do some of your own research and include them in your own celebrations?

Create your own unique website with customizable templates.
Photo used under Creative Commons from wwarby
UA-121891675-1